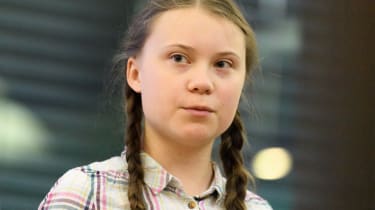 Michael Gove has pledged tougher action on climate change after confessing that a speech by a teenage environmentalist had made him feel “a sense of responsibility and guilt” over his generation’s muted response to the dangers facing the planet.

In a speech in Westminster, Greta Thunberg, 16, the Swedish schoolgirl activist who has inspired protests across the world, said the UK government’s support for “new exploitation of fossil fuels”, such as the shale gas fracking industry, the expansion of North Sea oil and gas fields and the expansion of airports, is “beyond absurd”.

In response, the environment secretary told her: “As I listened to you I felt great admiration but also a sense of responsibility and guilt because I recognise I am of your parents’ generation. I recognise we have not done nearly enough to deal with the problem of climate change.”

Gove declared that “thanks to the leadership of Greta and others” it has “become inescapable that we have to act”, The Times reports. He added: “Greta, your voice has been heard”.

In her speech, Thunberg took the current generation of politicians to task, telling them their “ongoing irresponsible behaviour will no doubt be remembered in history as one of the greatest failures of humankind”.

She added: “You lied to us. You gave us false hope. You told us that the future was something to look forward to. You don’t listen to the science because you are only interested in solutions that will enable you to carry on like before.”

Earlier in the day, Thunberg had met the Labour leader Jeremy Corbyn, and the leaders of the Liberal Democrats, the Scottish National Party and Plaid Cymru, as well as the Green MP Caroline Lucas.

However, Theresa May declined to attend the meeting and an empty chair marked her absence. The Times criticises the Prime Minister, saying “she would have been wise to find the time” to meet the teenage activist, who has rapidly attained a global profile as the voice of a younger generation demanding radical action on climate change.

Thunberg has also received praise for educating the public about autism. Speaking to the BBC yesterday, she said the “gift” of living with Asperger syndrome helps her “see things from outside the box” when it comes to the environment. “I don’t easily fall for lies, I can see through things,” she said.