How will climate change affect the global economy?

Climate change could shave 3% off the global economy over the next three decades, a study from the Economist Intelligence Unit has concluded.

Measuring the preparedness of the world’s 82 largest economies and based on current trends, the report found that the fallout of warming temperatures would cost the global economy $7.9bn by 2050 as increased droughts, flooding and crop failures hamper growth and threaten infrastructure.

Africa, South America and the Middle East are likely to be impacted the hardest, “because they have higher average temperatures and smaller economies in size, making them more vulnerable to the impact of climate change”, says CNBC.

By contrast “wealthier and more developed economies have it easier when it comes to battling the onslaught of climate challenges”, says CNN Business.

Climate change is only predicted to shrink the US economy by 1.1% over the next three decades, while western Europe’s GDP growth stands to drop 1.7%.

“Preparation for climate change is higher in these regions, which is making them more resilient,” says CNN. “But being rich is only part of the deal. The quality of government institutions also matters. Institutions must be able to adapt to change and put effective mitigation policies in place to remain intact in the face of climate challenges.”

World leaders are set to meet next month in Madrid at the annual UN Climate Change Conference where they will discuss how to limit the global average temperature rise to 1.5C, “a core aim of the 2015 Paris Climate accord”, says CNBC.

It comes as the US begins the official process of withdrawing from the Paris agreement. The Trump administration has argued the climate deal imposes an “unfair” economic burden and last year dismissed its own government report warning that climate change would cost the US economy billions of dollars.

Some worry this sets a dangerous precedent for poorer nations. The Straits Times, based in Singapore, says requirements to decrease greenhouse gas emission to meet the targets agreed in Paris in 2015 are “a source of controversy in developing nations which say their economic growth shouldn’t suffer after decades of fossil fuel use by wealthier countries”. 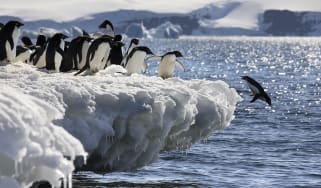