Chasing the Northern Lights in Norway 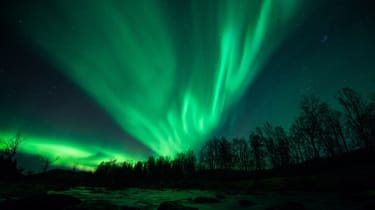 As I’m sitting down to dinner aboard the MS Nordnorge in the middle of the Norwegian Sea, I hear an announcement over the tannoy: “The Northern Lights are now visible.”

After five days aboard the ship, journeying up the side of the Norwegian coast in search of the elusive aurora borealis, this is the moment we have all been waiting for.

Crowds spill out onto the top deck of the ship and there they are, the ethereal lights dancing across the sky. They form a huge swirl overhead, green tinged with bands of yellow and red. They peek out from behind the surrounding mountains and cast a pale green sheen on the surrounding sea.

The Northern Lights have captured the human imagination for centuries. Norse mythology built tales around them, with some Viking legends describing the lights as reflections of the armour of Valkyries, who would lead chosen warriors to the Norse god Odin. Other stories suggested the lights were the Bifrost Bridge, the glowing arch which led fallen warriors to their final resting place in Valhalla.

The indigenous Sami people feared the lights, considering them as a bad omen. They believed that if you pointed or waved at the lights they could swoop down and whisk you away into the sky.

Seeing the lights firsthand, it’s easy to see why such fantastical explanations were created to explain them. To see the Northern Lights is to see the sky alive above you. The scientific explanation, that the lights are the result of charged particles from the sun disturbing the earth's magnetosphere, is a far less alluring concept than what the myths and legends offer.

Cruise company Hurtigruten guarantees that guests will see the lights while aboard the Northern Lights cruise, or get another trip for free.

I was skeptical of their confidence considering how common it is for people to venture to Scandinavia and return disappointed. Even if all the conditions are right, if the sky is too cloudy the lights will be obscured. It turned out that Hurtigruten had every right to be confident in their promises, as we were treated to two incredible light shows on our final two nights.

Although the lights were undoubtably the highlight, the cruise itself has so much to offer. This is especially true if you are an adventurer who wants to reach places that might ordinarily be unreachable and explore the region in a completely unique way. 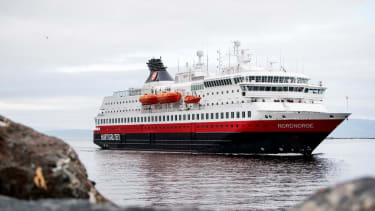 When people think about cruises they often picture grey hair and placid evenings spent playing Scrabble. While it is true that the pace of cruise life is far more leisurely than a typical holiday, the periods of leisure are interspersed with action-packed adventure.

This particular cruise is more of an expedition ship than a cruise ship, with daily stops in various cities across the coast and a range of activities, from strolls around the city, to dogsledding, hikes, bird-watching and visiting glaciers, all on offer.

There is something magical about weaving through snow-capped fjords with nothing else but the open sea surrounding you. The ship isn’t very large by normal cruise standards, with a maximum capacity of 590 passengers. There are seven decks which include three restaurants, a bar and a bakery and ice cream parlour. There is also a fitness room, sauna and two outdoor hot tubs.

My room is one of only 12 suites, which has a comfortable double bed, sizeable TV, desk area and en suite bathroom. It was lovely to have the extra amenities, but a regular room is perfectly adequate considering you don’t spend too much time couped up in your bedroom. 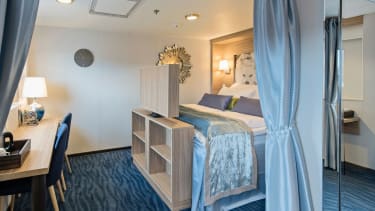 The entire cruise is 12 days long, six days northbound and then six days southbound, but passengers can choose to join for any stretch of the journey, with a cast of locals often hopping on for a night. We take the northbound journey, and I would recommend doing it this way around. There is something additionally exciting about venturing up the coast, entering colder climes while inching closer and closer towards the lights.

We start our journey in autumnal Bergen, where the streets are lined with orange and yellow leaved trees with red winter berries, perfectly matching the colour scheme of the wooden slatted houses. The further you venture north, the more wintery it becomes, with one of our final stops Honningsvåg featuring the same colourful wooden houses but peppered along pure white snowy hills. The appearance is that of a toy town.

Out of the many activities and excursions offered one of my favourites was visiting Norway’s largest husky farm in Tromsø. Although the snow wasn’t thick enough for us to go dogsledding, we were able to play with the puppies and hundreds of incredibly friendly dogs— truly a dog lover’s heaven.

Another unforgettable excursion was one of our last, visiting the North Cape, the northernmost point of mainland Europe. It is a sight to behold, with powdery white snow as far as the eye can see, and the appearance of a perpetual sunset (despite it being 1pm) due to the high latitude.

Aside from all the exciting excursions, the expedition team keep the time on the ship fun and entertaining, with many lighthearted ceremonies and games organised. As we enter the Arctic Circle on day four, we meet on the deck for the Arctic Circle ceremony, which involves guests volunteering to have a ladle of ice water poured down their back before being given a shot of cloudberry wine. Another fun evening was spent on the deck while passing through the steep Trollfjord while drinking “troll juice”, which resembled a hot toddy. 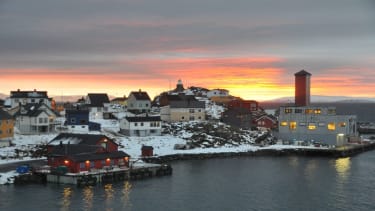 One of the most unexpectedly fun aspects of the trip is the “Norwegian way of life” talks held almost daily by the expedition team. These talks generally cover information about the next location we will dock at, as well as an insight into Norwegian art, music, language and culture. Not only are they genuinely informative, they are surprisingly hilarious.

The team also use the tannoy to make announcements about “points of interest” that we sail by, alerting you to head to a specific deck for the best view. This system is also used to alert guests when the lights are visible, and there is an option to turn them on in your room, so you never miss an announcement.

The lights, of course, are the main event. On our last evening we are treated to another light show, this one even more spectacular than the first, with much more of the sky painted green. After half an hour of watching the lights, I started to pack up my camera and tripod only to hear a chorus of “whoas”.

I looked up and saw the lights suddenly and swiftly dancing and swirling overhead. Although it’s easy to obsess over getting the perfect shot, the most important thing to remember is to stop and take it all in.

I put down my camera, sat on the floor and just gazed above at the breathtaking sight.

Hurtigruten Northern Lights Voyage - Prices start from £849pp for a classic voyage northbound from Bergen to Kirkenes. The full round-trip voyage of 12 days starts from £1249pp.

Costs for a full board in a polar outside cabin including flights start from £1,199pp and arctic superior cabins (the rooms in which The Week Portfolio stayed) start from £1,499. To book, visit hurtigruten.co.uk

The Week Travel has a special offer on 12-day Hurtigruten northern lights voyage, including flights from UK airports to Bergen. Click here for more details 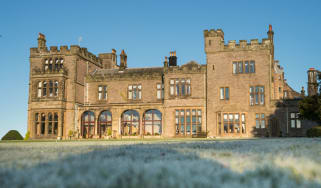