Instant Opinion: Trump vs. Thunberg ‘the battle of our age’ 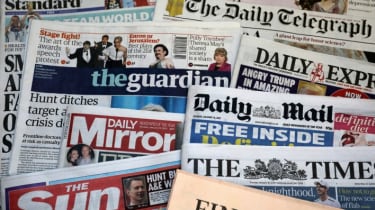 1. David Aaronovitch in The Times

Trump v Thunberg is the battle of our age

“Not since the days of Stalin and his pseudo-biologist Lysenko has science been ideologically driven: viruses, resistant bacteria, melting ice caps, the challenge of massive technological change are common problems with common (if complex) solutions. Yet increasingly everything is treated as though it was a matter for partisan contention. We find our camp, locate our tribe and set about the business of mutual reinforcement. The leaders of the tribes gain their positions by telling their audiences how very, very right they are and how very, very wrong are the others.”

2. Sherelle Jacobs in The Daily Telegraph

“When did Western civilisation enter this new Dark Age? The creepy scenes of Greta’s machinic protestations at Davos offer a clue. Managerialism, an ideology that has filled the vacuum created by the collapse of communism and post-Seventies disillusionment with market capitalism, infects every corner of society. The twist is that it relies for its survival on the flagrant denial of the chaotic complexity upon which it feeds. It deems that all problems (like all corporations) share more similarities than differences, and can thus be solved through generic, optimised processes. Thus activists like Greta reduce climate change to a clearly diagnosed illness that can be treated by meeting precise deadlines, while the rest of us pay the bill. And thus our elites – who share the same arrogant belief that we have all the expertise to address the Earth’s intricacies – cravenly refuse to acknowledge anything that throws into doubt established ‘facts’. Sadly, until the era of managerialism falls in on itself, we are probably stuck.”

3. Suzanne Moore in The Guardian

“Boris Johnson is a chameleon, and modern conservatism is opportunism presented as modernisation: it has an ability to meld wildly different views, and adapt. This new Tory hegemony is not a rerun of Thatcherism or Cameronism, though it has absorbed those things. The left’s response that it is simply a retread is an insult to voters’ intelligence. It is also a refusal to deal with the present. Shouting about austerity and neoliberalism may have felt righteous, but it was never policy.”

4. Janan Ganesh in the Financial Times

on finding the political sweetspot

America is still waiting for a true populist

“In a vaunted age of populism, the US does not have a true populist. No politician of national clout stands for both the economic and cultural sides of the creed. Mr Trump did, more or less, in his 2016 campaign but then — tariffs aside — governed as a Republican supply-sider. Mr Sanders also came close to a balanced populism before softening on immigration. Each man intuited the blend of policies that Americans wanted and decided not to give it to them. The same could be said of much of the political class. The marginal voter appears to crave universal healthcare and higher taxes on the rich, but also tighter borders and less strident identity politics. That ‘but’ is a slander, of course, as no theoretical conflict exists here. It all adds up to a coherent belief in social cohesion under paternalist government. A European would recognise it as Christian Democracy or One Nation Toryism or even Gaullism, but it is just the politics of mid-20th century America, when immigration was low and the welfare state filled out.”

on left and right politics

“It is high time to retire the horseshoe theory according to which extremes of right and left must always meet somewhere, such that the only salvation from ‘political sociopaths’ lies with the center. Conventional wisdom has it that populists criticize elites. In recent years, with the rise of populists around the globe, there is also the suspicion that they pose a systematic threat to liberal democracy as such. But it is wrong simply to equate populism with being ‘anti-establishment.’ After all, any old civics textbook will say that keeping a critical eye on the powerful is actually a hallmark of being a good democratic citizen, and nothing particularly populist.”