What is in the unredacted Mueller Report?

by The Week Staff
Robert Mueller, who served as special counsel for the US Department of Justice

The US Department of Justice has been ordered to hand over an unredacted version of the Mueller Report into possible Russian interference in the 2016 presidential election.

Robert Mueller’s investigation did not prove that Donald Trump’s campaign criminally conspired with Russia to influence the election result.

Now a less heavily redacted version of the report could enter public hands.

BREAKING in my/@BuzzFeedNews/@EPICprivacy #FOIA lawsuit to unredact the Mueller report Judge Walton just ordered DOJ to turn over an unredacted copy of Mueller report by March 30 so he can review it to determine what can be further released publiclyThis is what we hoped for! pic.twitter.com/c0B6ZD0vqc

What does the latest ruling say?

A ruling by federal judge Reggie Walton accuses the attorney general, William Barr, of misrepresenting the Mueller Report’s findings before handing it to Congress.

The judgment says that Barr misled the public about the contents of the unredacted report, in the knowledge that this would not be checked because the public did not have access to the report.

MSNBC’s justice analyst Matthew Miller said the statement was “just not the type of thing you read from federal judges about the attorney general. The fact he felt the need to go this far shows some real concern about the rot inside DOJ [Department of Justice].”

The court ruling says that the Justice Department must hand over the full, unredacted report by 30 March, so a judge can decide which further sections can be released publicly.

What is in the redacted report?

Material from grand jury proceedings is secret under federal rules, and portions of the report were redacted on that basis. But some of that redacting may have been improper, according to Judge Beryl Howell of the DC District Court.

Material relating to the work of US intelligence agencies was also redacted, as officials were concerned that sources of intelligence and the methods used to gain it could compromise the work of America’s spies.

Information that related to other cases that were ongoing at the time was also scrubbed from the report, as was derogatory information uncovered about individuals who were not accused of a crime.

The image below from Vox shows just how much of the report was redacted. 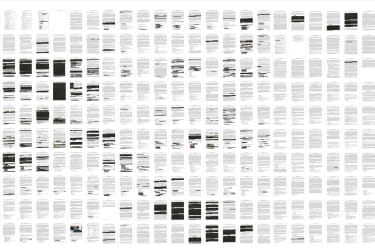 Vox found that 7.25% of the report’s contents had been scrubbed out, and the most redacted sections were on Russia’s hacking and election interference. In the section on Russian hacking and dumping operations, 23% of the report was redacted.

A total of 4% of the section examining links between the Russian government and the Trump campaign team was redacted.