One million coronavirus cases: what the figures tell us

The number of confirmed coronavirus infections around the world has passed the million mark, with the global total doubling in a week.

More than 1,030,000 infections have been confirmed worldwide, and more than 55,000 deaths, according to the latest figures.

As we pass yet another grim milestone, what can we learn from the numbers?

The actual death rate from the virus is far lower than 20%, but because in many countries – including the UK – only very sick people are being tested and confirmed as having the virus, it looks a lot higher.

England’s chief medical officer, Chris Whitty, has said the ultimate mortality rate will prove to be 1% or lower. By contrast, the death rate for common flu is 0.1%.

Despite the frightening spread of the infectious disease caused by the new coronavirus, the Office for National Statistics found that Covid-19 accounted for just 1% of the UK’s total deaths in the week ending 20 March.

Things are getting worse

It took a month and a half for the first 100,000 cases of coronavirus worldwide to be confirmed – but 500,000 cases were reported in the past week alone. 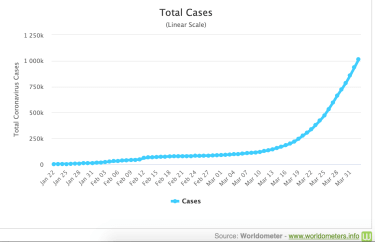 Statistics on the number of deaths paint an equally bleak picture, with the total increasing daily. 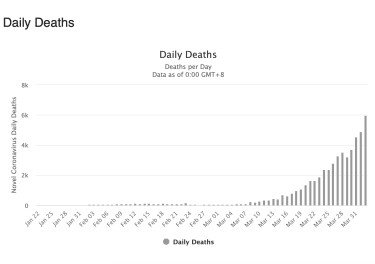 Europe is the epicentre

Europe has been hit hardest by the new coronavirus, with around half of the world’s cases concentrated in the continent.

The Guardian says that Spain, Italy and Germany are all in the top five countries for reported cases, with Italy and Spain recording the world’s highest number of deaths with nearly 14,000 and 11,000 respectively.

The country with the next highest number of deaths is the US, which is at around 6,000, the paper adds, just over half of that in Spain.

The US has the highest number of cases, and has seen nearly 1,200 people die there over the course of the past day.

Nearly quarter of a million people are confirmed as having the virus in the US, with that number set to rise rapidly as more testing is carried out.

The elderly are most at risk

The latest UK figures have revealed the age groups of those who have died from coronavirus to date.

A 13-year-old boy who died at King’s College Hospital in south London is believed to be the youngest victim in the UK so far.

Africa and South America are yet to see the worst

There are just over 7,000 cases of coronavirus confirmed across the whole continent of Africa, a fraction of what many continents and even countries are dealing with.

The continent, where some of the world’s least developed countries have poor healthcare infrastructure, has so far been spared the worst of the pandemic.

According to the BBC, health experts have warned that “strained public health systems in Africa could become quickly overwhelmed if the virus takes hold, especially in overcrowded urban areas”.

And The Washington Post adds that the World Health Organization has said that only eight countries on the continent are prepared to deal with a major outbreak.

Numbers are still low in South America, but rising. Like Africa, there is likely to be significant underreporting of new cases and even deaths.

Brazil is the worst affected country in South America so far, with just over 8,000 cases confirmed and more than 320 deaths.

The lassiez-faire approach of the Brazilian government has resulted in drug gangs taking it upon themselves to enforce lockdown regulations in the nation’s largest favelas.

“The health system is precarious and we have isolated tribes here,” says Marivelton Bare, the president of the River Negro Indigenous Federation, in The Guardian.