Who are the Proud Boys and Antifa and are they terrorists?

One of the most talked-about moments from the first US presidential debate between Donald Trump and Joe Biden came when the US president declined to condemn white supremacists.

Instead of disavowing violence, Trump said that a far-right group known as the Proud Boys should “stand back and standby”, adding: “Somebody’s got to do something about Antifa and the left”.

So who or what are the Proud Boys and Antifa?

Who are the Proud Boys?

The Proud Boys are “far-right, anti-immigrant, all-male group with a history of street violence against its left-wing opponents,” says the BBC.

To become a member of the group, prospective recruits must declare themselves to be “a Western chauvinist who refuses to apologise for creating the modern world”.

Gavin McInnes, formerly co-founder of Vice Media, established the group in 2016, though he subsequently distanced himself from it after a violent clash with Antifa saw ten members of the Proud Boys arrested, with two ultimately being sent to prison.

In recent months, Proud Boys members have been involved in street brawls during protests in Portland, Oregon, Seattle and New York City.

The group's name is a reference to a song that was written for, but eventually cut from, the Disney film Aladdin. It has since become the de facto anthem of the organisation.

Trump has previously “recoiled at criticising even his most extreme supporters, including white supremacists,” The New York Times says.

But it is notable that he did not take the opportunity during the first presidential debate either to denounce the Proud Boys or to “modulate his position in front of such a large audience and with a clear political need to expand his appeal beyond his base”.

Instead, Trump’s effective endorsement of the group was a dangerous move which could incite further violence, according to experts who study extremist groups.

“A green light like ‘stand back and standby’ is catastrophic,” Kathleen Belew, a historian of American white power movements, wrote on Twitter.

According to New York City-based anti-hate organisation ADL, Antifa - short for anti-fascists - is a “a loose collection of groups, networks and individuals who believe in active, aggressive opposition to far right-wing movements”. The movement has a logo showing a double flag, usually in black and red, but has no central leadership.

Al Jazeera agrees that Antifa is an “amorphous movement”, rather than “an organisation as Trump often says it is”. The movement’s members “tend to be grouped on the leftward fringes of the US political spectrum, many describing themselves as socialists, anarchists, communists or anti-capitalists”, says the news site.

Some Antifa groups date the origins of the movement to fights against European fascists in the 1920s and 1930s, the BBC reports.

The collective came under the media spotlight following clashes between white supremacists and their opponents in Charlottesville, Virginia, in August 2017.

Al Jazeera says that “other than their opposition to right-wing ideologies, there is little binding the Antifa movement’s adherents together. Some focus on environmental causes or the rights of indigenous groups, others for the rights of LGBT activists.” 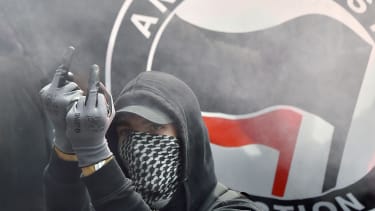 Why does Trump call them terrorists?

“Willingness to use violence marks out Antifa from many other left-wing activists”, with the movement’s followers sometimes “directly and sometimes physically confronting the far-right on the streets”, says the BBC.

This view is echoed by ADL, which says that “when Antifa show up, as they frequently do, they can increase the chances that an event may turn violent”.

US law enforcement officials have publicly voiced concerns about “Antifa actors and the violence that sometimes accompanies their public appearances”, Al Jazeera reports.

In November 2017, FBI director Christopher Wray told a congressional hearing that the bureau was pursuing “a number of what we would call anarchist extremist investigations, where we have properly predicated [people] who are motivated to commit violent criminal activity on kind of an Antifa ideology”.

Both the Proud Boys and Antifa are relatively small, says the BBC, with “at the most, a few thousand active supporters”. But their “propensity for violence, particularly when they confront each other on American streets, has made them a much bigger topic of conversation than those numbers suggest,” the broadcaster concludes.