Karl Lagerfeld once said: “There are some things that never go out of fashion, jeans, a white shirt and a Chanel jacket.” And, when one thinks of Chanel, if it’s not the quilted bags, the little tweed suiting or the No.5 fragrance, it’s the interior of 31 rue Cambon, the couturier’s famous maison: of mirrors and a winding staircase, an image as iconic as the fashions of Mademoiselle herself.

“Because it’s such a welcoming space,” confides Chanel creative director, Virginie Viard, who was appointed to the role following the passing of Karl Lagerfeld in 2019 (she had been his right hand prior to that). “I love the huge sofa in beige suede. Karl liked to surround himself with deep divans too. In fact, Gabrielle’s apartment reminds me of Karl’s first apartment that I knew, where one would sit on four-poster beds disguised as sofas.”

It was with this dose of nostalgia, the story behind Chanel and its stylistic hallmarks, that Viard went about approaching her latest Métiers d'art offering, the annual collection dedicated to celebrating the specialist workshops and artisans with whom Chanel works (Lemarie, for example, which makes its famed camellias; and Lesage, the embroidery atelier). “They make our creations sublime,” praises Viard. “This is the return to the codes and the very first Metiers d’art show in 2002, which actually took place in the salons, at 31 rue Cambon. That show was very dear to me. So, for this Metiers d’art collection, I wanted it to revolve around Gabrielle’s apartment.”

Which is the stuff of legend. Gabrielle herself would watch at the top of the stairs out of sight from her audience to glimpse their reaction as the models descended, Chanel-clad, into the salon. The apartment’s leitmotifs – beige, black, gold and crystal - were transformed into a runway setting designed by the American film director Sofia Coppola for the collection’s unveiling back in December at the Grand Palais in Paris. 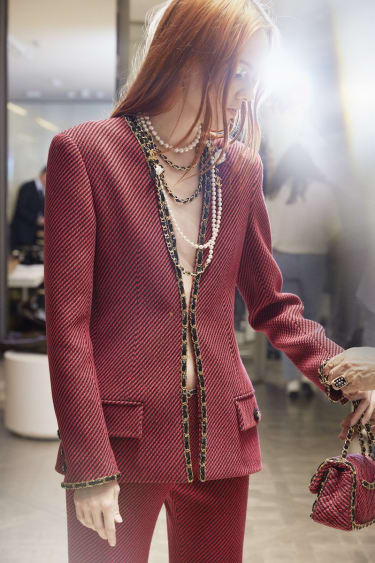 “We thought about the original shows that were held at 31 rue Cambon, and how great it must have been to see the models walking by so close,” explains Coppola, for whom personally there is a particular “thrill” in the iconic mirrored staircase. “The models smoked cigarettes while listening to Lou Reed. It was more of an attitude than a theme,” recalls Viard.

And it’s “attitude”, notably, that is a Chanel characteristic just as much as those quilted bags or fragrance - and one embodied no better than by the Chanel jacket, renowned as it is rendered in tweed; straight in cut and structure; yet simultaneously casual and laidback but elegant in appeal. Innovated by Chanel as a reaction to the constraints of 1950s dressing, it was reinvented countless times over by Lagerfeld when he joined the house in 1983. In 1985, for example, he teamed it with jeans and a striped sporty top for a modern rebirth.

“It is integral to the DNA of Chanel,” says Marlene Wetherell of the eponymous New York vintage store (and industry insider favourite), noting its popularity today as both a worn and collected piece. “It didn’t start off as a ‘jacket’ by itself – it was part of a tailleur which had a matching skirt and silk blouse that went underneath. But it was the jacket that stood out. The silhouette is what was important here. The cut, hitting above the hip,” she explains.

The front of the jacket is mounted along the straight grain with no bust darts, done so to increase suppleness without losing shape; the same principle of which is applied to the back, separated by a seam down the middle. There is of course the genius brass chain stitched into the hem on the lining to ensure a perfect drop. “This made it sit well on the body,” says Wetherell. “As well as the high cut armhole, again creating a slimming effect. We are speaking of engineering here. She was brilliant at that. As time passed the skirt suit seemed less practical. Jackets remained, they remained because women liked the fit.” It was that easy.

“There is a sort of simplicity in going back to Chanel’s ABC. We don’t need to do too much,” says Viard of revisiting these foundational codes. And, self-confessedly, she describes herself as being “a child of Karl and Gabrielle”. She elaborates: “I have completely absorbed the Chanel codes. I saw Karl twist them so much. I have grown up here… I like the idea of a patchwork [of Chanel and Karl’s work]. For me, it [the designs] has to be on the same level as in real life. I always question the context, which has nothing to do with the way we lived decades ago: what would a woman like today? How would she wear it?”

In 2020, her proposal comes by way of another Chanel emblem: two-tone as well as the reinterpretation of a tie-dye jacket, inspired by a pink tweed suit originally made by Chanel in 1960 which featured a multi-coloured lining. This time that lining makes for the exterior tweed tones of the design. Meanwhile, short styles of jacket are worn with low-waisted skirts and accessorised with jewelled belts and there is a showstopper of a style that is embroidered with over 23,000 sequins.

Wetherell perhaps sums it up best: “In my opinion everyone should own a Chanel jacket.”