135,000 jobs in Britain facing the axe amid ‘economic armageddon’

Hundreds of thousands of jobs face the chop at some of Britain’s biggest companies amid the continuing economic fallout of the coronavirus pandemic.

Analysis by the Daily Mail has revealed that 135,000 positions are set to be slashed in the UK, as well as a further 95,000 at British firms abroad.

Retail stalwart WHSmith, which has been trading for more than 200 years, announced yesterday that it would be cutting 1,500 staff members, many of whom work in train stations and airports.

“I regret that this will have an impact on a significant number of colleagues,” said WHSmith chief executive Carl Cowling. “We will do everything we can to support them at this challenging time.”

Other companies currently imposing layoffs include PizzaExpress, Currys PC World, Hays Travel and DW Sports, who are reportedly axing 4,470 jobs between them. Last night it was also announced that around 1,500 staff at hotels managed by LGH could lose their jobs, including staff at Crowne Plaza, Holiday Inn and Hallmark.

The job losses look set to “intensify the pressure on the government to get Britain back to work and to toughen the message to employers and staff”, the Mail says, with Conservative MP Iain Duncan Smith warning of “economic armageddon” if employees do not head back to work.

“With it will come swathes of unemployment leading to even more lives being lost,” Duncan Smith added.

In response to the dire forecasts, Labour leader Keir Starmer has ramped up his campaign for a targeted extension of the furlough scheme, which is currently supporting 9.6 million workers and is due to end in October, the Daily Mirror says.

“We face a jobs crisis on a scale not seen for generations,” the leader of the opposition admitted. “But it is not too late for the Government to act.” 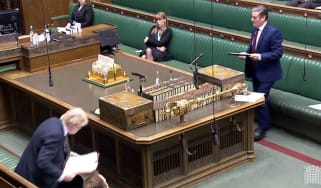