Will Prince Charles ever be crowned king?

Prince Charles marked the 50th anniversary of his investiture as the Prince of Wales last night with a star-studded party hosted by his mother at Buckingham Palace.

The Queen was joined by other members of the royal family, celebrities and representatives of the prince’s charity work to celebrate what the Archbishop of Canterbury called his “tireless work” and “sacred duty of service” for more than half a century.

Charles became Prince of Wales at the age of nine in 1958 and was formally invested with the title by the Queen on 1 July 1969 at Caernarfon Castle.

Now 70, the prince has been heir to the throne since 1951 following the death of his grandfather King George VI, making him the oldest and longest serving Prince of Wales in British history.

But with the queen now well into her 90s and looking to pull back from some of her royal commitments, questions continue to grow about whether she will abdicate and pass the crown on to her son while she is still alive.

Would the Queen ever step down?

Constitutionally, there is nothing to prevent Queen Elizabeth, who became the UK’s longest-reigning monarch in September 2016, from stepping down. Her uncle, Edward VIII, famously abdicated in 1936 in order to marry US divorcee Wallis Simpson, making his brother, the Queen’s father, King George VI.

If she were to relinquish her position, the Queen would follow Juan Carlos of Spain, who abdicated in June 2014, as well as the last three queens of the Netherlands, who all stepped aside in their 70s.

Those close to the monarch, however, say she would never consider giving up the throne. Sarah Bradford, the author of Queen Elizabeth II: Her Life in Our Times, says: “The Queen simply feels she must do her duty and she’s never even contemplated abdication.”

However, a book published in 2018 by royal correspondent Robert Jobson has suggested the Queen will in fact stand aside in three years’ time, letting her son take over as Prince Regent while she is still alive.

Clarence House, the official residence of the Prince of Wales, has made no comment, but bookies are offering odds as short as 2/1 that the Queen will step down next year, the Daily Express reports.

What does the public think of Prince Charles as king?

Surveys have consistently suggested the public is not keen on the idea of Charles as king or his wife, the Duchess of Cornwall, as queen. 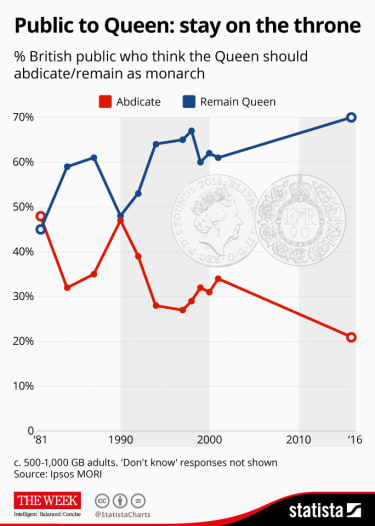 As our graphic shows, support for the Queen abdicating peaked in 1990, when almost half of the country were keen to see her pass on the reins of power. However, enthusiasm for “King Charles” plummeted soon afterwards, probably due to the public breakdown of his marriage to Diana, Princess of Wales, in 1992 amid allegations of infidelity.

It wasn’t until the end of the 1990s that the Prince's reputation began to pull out of its nosedive. The modest climb can be traced to the 1997 appointment of PR adviser Mark Bolland, who is widely credited with restoring Charles's image and preparing the public for his second marriage.

Despite that, public acceptance of the Queen's abdication in favour of her eldest son has never again approached its 1990 peak. Recent surveys shows 70% of the UK would prefer her to remain.

Could he pass the crown on to his son?

Nearly half of all Brits would like to see Prince Charles pass the crown directly to Prince William upon the Queen’s death, according to a new poll.

The survey, carried out last year by BMG Research for The Independent, found that 46% of those questioned would approve if the Prince of Wales, who recently celebrated his 70th birthday, removed himself from the line of succession in favour of his son.

Pro-abdication sentiment was particularly strong among the 18 to 24 age group, with a third of younger respondents saying they would “strongly support” Prince Charles passing the throne to William when the Queen dies.

The survey also indicates that only one in five Brits supports the idea of Camilla, Duchess of Cornwall, taking the title of queen if Charles becomes the next monarch.

Nonetheless, one royal expert dismissed the prince’s official stance that his wife will be known as the Princess Consort when he takes the throne as “nonsense”.

At the time of the pair’s marriage in 2005, Clarence House assured a hostile public that Camilla would not style herself as queen upon Charles’ accession.

However, Royal Central editor Charlie Proctor told The Sun that he believed she would take the title of Queen Consort.

“The monarchy is not a popularity contest, and you can’t change titles in fear of certain people still having chips on their shoulders,” he said.

Would ‘King Charles’ be bad for the monarchy?

The problem with Charles as monarch, says the Daily Mail's Allison Pearson, is that “we know far too much about his foibles and past errors to revere him as we revere his mother” – and who on earth can follow such an act, she asks.

In addition, the Prince’s well-documented interventions in politics, including the “black spider memos” sent to government ministers, cast doubts about his ability to remain neutral.

Constitutional monarchy “can't possibly work if the monarch holds and expresses strong views of his own”, royalist Geoffrey Wheatcroft writes in The Spectator.

The Prince of Wales “possesses a strong sense of duty”, he says, asking: “Might not it be best expressed by renouncing the throne in advance?”

The Guardian’s Polly Toynbee advocates a more extreme solution - abolishing the monarchy altogether. “Let [Queen Elizabeth II] reign as long as she lives,” she writes. “But let her be Elizabeth the Last.”

Infographic by statista.com for TheWeek.co.uk