Urban Exploration: what is it, who does it and is it legal?

The craze has been described as 'fetishistic' and 'criminal', so why is it growing in popularity? 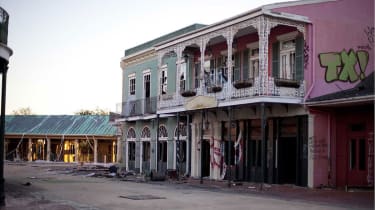 As austerity has taken hold in the UK, urban decay has become more prominent, with abandoned factories, amusement parks and other man-made structures increasingly common across the country.

At the same time a desire to explore and document the history of urban areas has led to a rise in the popularity of 'urban exploration' and 'place hacking'.

Last year the UK's most famous urban explorer Dr Bradley Garrett – who found fame after scaling the Shard during its construction in 2012 - went on trial for conspiring to commit criminal damage following a number of visits to disused London Underground tube stations as part of his research for a PhD in geography at Oxford University.

Though he was eventually spared a jail sentence, Garrett's arrest highlighted the continuing battle between urban explorers and the state over the validity and legality of their chosen hobby.

Critics describe the practice as "naive, fetishistic, self-heroising and, well, criminal", reports The Guardian. However, the author Will Self has defended urban exploration, writing in the Evening Standard: "I personally believe place-hackers are performing a valuable service by reminding us that the city should, in principle, belong to its citizens, and should mostly – if not entirely – be accessible to them."

What is Urban exploration?

Urban exploration or Urbex, as it has become known, is the exploration of man-made structures often abandoned or hidden from the general public. Photography plays a large role in the popularity of the hobby but historical documentation has also become a factor as urban landscapes change ever more quickly over time.

It is generally accepted that the term 'urban exploration' was coined in 1996 by Canadian explorer Jeff Chapman. However The Scotsman reports that urban exploration was taking place as far back as 1793 when Philibert Aspairt, a hospital porter, is believed to have "got lost in the limestone quarries beneath Paris supposedly while searching for some ancient bottles of chartreuse". His skeleton was discovered 11 years later.

The old adage "take nothing but photographs, leave nothing but footprints" has often been applied to urban exploration. However the recent rise in popularity of the hobby has brought claims that this rule is no longer being followed.

Is it safe and is it legal?

Urban exploration can often be dangerous and illegal, a police spokesman said ahead of Bradley Garrett's trial. Garrett was also accused of breaking into Transport for London property to access disused rail tunnels. "The railway, whether disused or in operation, is a dangerous place for those not meant to be there and access restrictions, which should not be taken lightly, are in place to protect members of the public from harm," said the police spokesman.

Urban explorers are often the first to acknowledge the danger of their chosen practice and one such explorer Richard Shepherd told the BBC that he never explored alone. "It's all about being careful. If I'm stuck in the middle of a derelict asylum and I fall and break my leg I need to know there's someone who can show the emergency services where I am," he said.

Exploring commercial properties, even disused ones, can also mean trespassing if explorers go onto property without the owner's permission. Many Urbex websites have a list of tips for keeping within the law. Would-be explorers are advised to "ask permission", "contact the local police beforehand" and "don't take souvenirs".

What locations have people explored?

Participation in urban exploration is "high in profile but small in number (perhaps 20,000 globally)", according to the Guardian. However the array of different environments that explorers have photographed and discovered continues to grow. In the UK, explorers have taken pictures from atop skyscrapers such as The Shard, sculptures such as the Angel of the North and bridges such as Tower Bridge and the Forth Road Bridge in Scotland.

Across the globe, abandoned amusement parks have become a particular target for enthusiasts, as Weburbanist.com explains: "When an amusement park becomes abandoned and an eerie silence descends to blanket the decay, the atmosphere seems to twist and takes on a nightmarish vibe."

The images captured from exploring the Six Flags Amusement Park in New Orleans following its closure after Hurricane Katrina have become a hallmark of the Urbex movement.

More recently, an urban explorer in Kazakhstan unearthed remains of the USSR's space programme in an abandoned hangar in the east of the country. According to Boredpanda.com: "The shuttles are the last remnants of a space programme that began in 1974 and was finally shuttered in 1993."