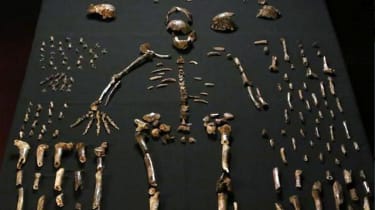 Scientists in South Africa claim to have found the fossils of a previously unknown ancient human-like species lying in a cave.

The creature may have lived up to three million years ago and been an early member of the evolutionary group that includes today's humans, say researchers.

More than 1,550 fossils were found in the Cradle of Humankind, a World Heritage Site about 50km north-west of Johannesburg. They come from at least 15 individuals, which show a mix of human and primitive characteristics. However, it is difficult to confirm the age of the creature, which has been named Homo naledi.

"What we have is a tall hominid, between 1.45 and 1.5 metres tall, was very skinny, had powerful joint muscles and had a brain about the size of my fist," said Professor Lee Berger, of South Africa's Wits University, who led the team.

According to the findings, reported in two papers published in the online journal eLife, the brain is small, like a gorilla's, but the hands are more modern and suited to making basic tools. The feet and ankles are built for walking upright, but the fingers are curved.

Other experts have pointed out the resemblance of the bones to those of early Homo erectus, a primitive species named in the 1800s, says The Guardian.

Tim White, a paleoanthropologist at the University of California, Berkeley, suggests the "unique" features displayed by the new fossils could just represent individual variation or variation at the population level of Homo erectus.

William Jungers, an anthropologist at Stony Brook School of Medicine in New York, told the Guardian: "If they are as old as two million years, then they might be early South African versions of Homo erectus, a species already known from that region. If much more recent, they could be a relic species that persisted in isolation. In other words, they are more curiosities than game-changers for now."