New Year’s Eve 2019: the best parties across London and the UK 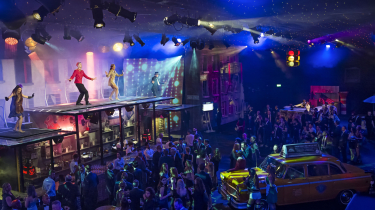 New Year’s Eve falls on a Tuesday this year, but with New Year’s Day a UK bank holiday there’s no need to worry about dragging yourself out of bed on Wednesday morning.

So for anyone tempted to stay at home with the hootenanny, our rundown of the best parties on New Year’s Eve should convince you there are better ways to see in 2020 than watching Jools Holland on TV (again).

The Warehouse Project is known across the UK for its Manchester club nights that draw big names and bigger crowds – and the New Year’s Eve party will feature the biggest of both.

The DJ line-up is something to behold: Annie Mac, Rudimental, Groove Armada, Hannah Wants, Artwork and Krystal Klear among others. 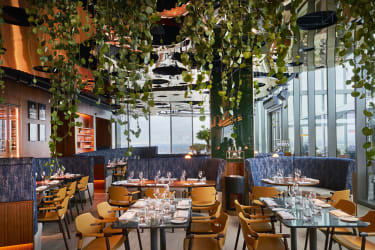 20 Stories has erected a gigantic snow globe on its rooftop for the winter months and it’s where you could be spending your final moments of 2019... if you’re quick enough to book a table that is. For £150 you’ll be treated to a Champagne reception, followed by an indulgent five-course meal of native lobster ballotine and fillet of beef rossini.

Bubbles will be handed out when the clock strikes midnight too, helping you ring in 2020 with some extra sparkle.

Yes it will be packed to the rafters, but Edinburgh’s famous street party is not to be missed. Mark Ronson is among those slated to perform at one of the many venues, and there’s a “Ceilidh under the Castle” for the truly dedicated Scots.

Also, don’t miss out on the torchlight procession to the street party. Multiple bars and street food stalls, plus magnificent views of Edinburgh Castle, will add up to a Hogmanay to remember.

Note: it’s a street party. That means it’s outside. In Edinburgh. In December. Dress warm and make the most of your free dram of Johnnie Walker – they do sponsor the event, after all.

For a magical midnight experience, Cardiff’s Winter Wonderland is the place to be. Enjoy live music, a family funfair and be in a prime position to watch the spectacular midnight firework display after the big countdown.

You can skate the night away at the undercover ice rink and the brand new Alpine Trail through Gorsedd Gardens. 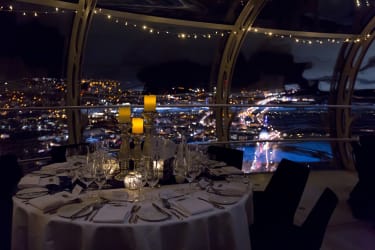 London isn’t the only city offering elevated parties on 31 December. British Airways i360 will be lifting its guests 450ft into the air just before the big countdown at 12am. Before you hop into the glass pod, you’ll be treated to a five-course meal with a half bottle of wine each to wash everything down. And afterwards? You’ll continue celebrations in the beach building where a DJ and entertainment will keep you on your feet.

Flight Club might not be going to extremes in terms of a theme for New Year’s Eve but that’s only because it doesn’t have to. This social darts bar is one of the funnest ways to see out your last hours of 2019, with a handful of games to choose from in its high-tec oches. Its usual range of cocktails and drinks will be available and there have been promises of treats throughout the night (last year staff brought out mountains of sausage rolls come 12am).

In 2016, the Natural History Museum hosted its first ever NYE ball, and it’s fair to say it was a roaring success.

To see off 2019, the ball will return for a fourth consecutive year, with lucky guests given a complimentary drink, workshops, a silent disco, UV body paint and an after-hours Museum of the Moon silent disco.

You can also make nocturnal animal masks, roam the galleries and for those who fancy a shot in the dark, there will be bars serving drinks all night.

So why not spend New Year’s Eve rubbing shoulders with the biggest (and oldest) creatures on Earth? 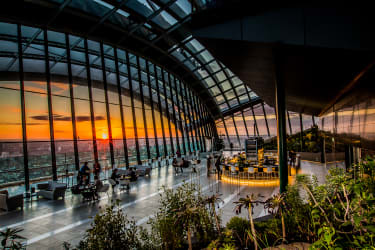 If there’s one rooftop in London that doesn’t need an introduction, it’s Sky Garden. Situated on level 43 of the famous Walkie Talkie Building, it’s best known not only for its views, but its evergreen garden. And on 31 December you can experience it in all its glory to the beautiful backdrop of fireworks lighting up London’s night sky. It’s set to be quite the show with a 1920s Gatsby theme and live music keeping shenanigans going until 2am.

If you like standing elbow-to-elbow with tens of thousands of strangers in freezing cold temperatures, then Electronic Sessions’ New Year’s Eve Fireworks Boat Party, which is fully heated, has two floors of music and no queues for toilets or drinks, might not be for you.

Boarding at Victoria Embankment from 7.30pm on 31 December, guests will party until midnight, when the boat will stop right underneath the London Eye, giving revellers a unique and incredible view of London’s famous fireworks. Tickets start at £97.

Madison, one of London’s finest rooftop bars offering spectacular views of St Paul’s, will be hosting an exclusive “20/20” party.

The night promises to “take in the sights and sounds of London in all its glory as we embark on a new decade, Madison style”.

With DJs, fireworks, drinks and canapes to ring in 2020, Madison will help you party like a real high-flier in the heart of London’s beautiful business district. Tickets start at £135.

By Order Of The Alluring Blinders - London 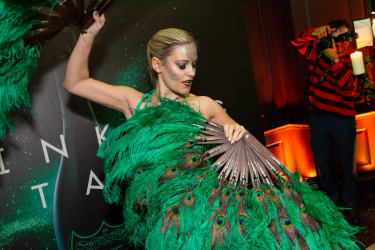 Peaky Blinders returned to our screens this year and, once again, Tommy Shelby didn’t disappoint. If you’re waiting eagerly for the next season to air, a good way to curb your fix is to attend By Order Of The Alluring Blinders. This New Year’s Eve party is inspired by the infamous family and it is promising showgirls and immersive performers, alongside dazzling cabaret performances. Set inside The Eden Room with an electric DJ set from resident DJ Greg Foat, it comes as no surprise that there is a strict 1920s dress code.

The gala claims to be the “most exclusive and sophisticated event this festive season”, offering a three-course gala dinner and party in the Grand Ballroom.

On top of the dinner and dancing, the night features a masquerade theme, a photo booth, live entertainment and screens streaming London’s fireworks display – with DJ countdown.

Calling all David Attenborough fans. Market Hall West End - also known as the UK’s largest food hall - is transforming its space with recycled and upcycled decorations this December to bring a massive Green Planet Party with zero waste to the capital. You’re encouraged to dress with a “hint of wild” and, in terms of the entertainment, rumour has it that some of London’s best DJs and performers will be there to keep you up until the early hours. If you need a break from the oasis-themed bar (and the dancing), there’s a retractable roof to grab some fresh air. 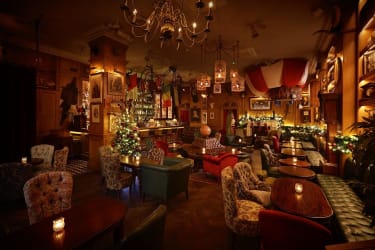 Founded and inspired by the fictitious character and adventurer, Phileas J. Fogg, Mr Fogg’s Mayfair residence has become a notorious hotbed for curious cocktail fans. For New Year’s Eve the team are throwing a knees-up masquerade ball and it’s the perfect excuse to finally pay it a visit. A Moët & Chandon Champagne reception will kick off proceedings, with the night revealing magicians alongside bottomless Champagne, Hendricks gin and cocktails until 3am.

Millbank Tower, near Lambeth Bridge, is well positioned for a view of London’s official firework show, especially from the lofty heights of the Skybar. It is throwing two parties to welcome in 2020: the 29th floor will be given over to the £650-a-ticket Decadence Defined event, in which champagne, cocktails and unlimited fine dining will keep guests partying all the way through to an indulgent champagne breakfast. One floor below, and at half the price, Cabaret Extravaganza, will feature burlesque and “boylesque” - keeping everyone happy - as well as live cooking stations and a champagne toast at midnight.

When it comes to bars, The Gibson is London’s flavour of the year. Brought to Shoreditch in 2017 from famed bartenders, it’s responsible for some of the best and bizarre mixes in the business. For New Year’s Eve they are hosting an evening of live music and bottomless Champagne for just £60. This includes a complimentary Gibson martini upon arrival and waves of canapés circulating throughout the night.

Beaufort Bar at The Savoy - London 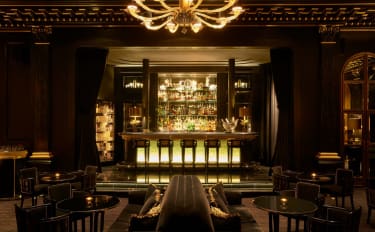 If you’re looking for an extra special start to 2020, there’s nowhere quite like Beaufort Bar. The world-famous bar that’s located within The Savoy is seeing in the New Year with several Champagne packages to choose from. Depending on your pallet, opt for Louis Roederer, Brut Premier NV, Vintage Rosé or Cristal and soak it all up with the unlimited canapés; think avocado tempura, Scottish lobster and shitake mushrooms and duck steamed buns.

You don’t need to buy flights to JFK to party in New York, not with The London New Year’s Eve Ball in town. Themed around the Big Apple, this quirky and immersive night out will see you drinking in Molly Malone’s, where a set of entertainers will perform on top of a speakeasy bar. After you finish your Irish tipple, you’ll then be transported to Times Square for a sit-down four-course meal. Unlimited wine and beer are included all night, which will be further fuelled by a live band and jaw-dropping acts.

2019 saw RuPaul’s Drag Race make its way across to the UK, crowning The Vivienne as its first ever winner outside the States. Bringing plenty of glitz and glam, you can catch a live performance from the famous Raja - who won the American title in season three - at The LaLiT New Year’s Eve Ball, alongside many other unmissable guests. Housed in award-winning restaurant Baluchi, this debauchery-driven evening promises a welcome glass of Pommery Brut Silver Champagne, followed by a mouth-watering four-course meal.