Rare £1 coins: how to find the most valuable ones 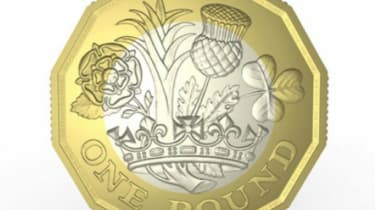 Since entering circulation three years ago, a number of flawed 12-sided £1 coins have fetched huge sums.

Along with rare older round versions fetching a pretty penny, it is definitely worth checking the change in your pocket before handing over a small fortune.

A number of “mistake” renditions of the new 12-sided coin have been spotted and sold since they started entering circulation in 2016.

One example features the new coin design stamped on an old £1 blank.

Just a handful of these extremely rare coins have been found, with one selling for £1,900 at auction in London in 2017. An identical coin reported by ChangeChecker.org sold for £205 on eBay after receiving 22 bids.

In 2016, a window cleaner was told that his rare £1 coin, which was stamped with the wrong date, could fetch up to £3,000. The Royal Mint, which has produced over two billion of the new 12-sided coins to replace their old round predecessors, confirmed that the flawed coin was genuine, and has 2016 on one side and 2017 on the other.

Last year, the Liverpool Echo reported a 27-year-old man, who was handed a completely silver £1 coin by a pub landlord, was immediately offered £100 in cash by an eagle-eyed coin collector who happened to be in the pub at the time.

An expert from Chards, a coin and bullion dealer, said if it was genuine, the coin was “extremely valuable”.

“Pound coins which are all silver have been struck from the incorrect blank [an unprinted coin] and are extremely rare. As to how much it's worth - that's entirely dependent on how much someone is prepared to pay for it,” he said.

Other cases of flawed coins reported include ones that are warped, have missing letters and are even missing the Queen's head.

However, The Sun says that the number of flawed coins is so minuscule that it's beyond what the Mint can measure. Scott Kuperus, a currency security and technical expert at the Royal Mint, says that with four million coins being minted every day, a few defects are bound to get through.

How to check the value of a coin

If you think you have a coin that could be worth more than its face value, the Royal Mint Museum offers a free verification service.

“Armed with this information, you should be able to get more value from it when selling either online or at a more traditional auction house,” says the Daily Mirror.

While the Royal Mint itself does not currently do valuations, a spokesperson told the Sun Online that along with sales of coins, it is considering offering the service in the future due to growing interest from customers.

To this end, This is Money reported that the Royal Mint has bought a stake in Sovereign Rarities Limited, a coin dealership based in Mayfair comprising a team of coin specialists.

Yet for the time being, The Sun says valuations are best done through the British Numismatic Trade Association or the stamp collection specialist Stanley Gibbons, which offers a free valuation service through its rare coin division, called Baldwin’s.

Why was the new 12-sided pound coin introduced?

The new 12-sided pound coin, hailed as “the most secure in the world”, was intended to be substantially more secure than the old one, with features that include micro lettering inside both rims and an image that works like a hologram. The material itself has components that can be detected when electronically scanned by payment machines.

About one in 40 of its round predecessors were thought to be fake, the BBC reports.

The Mint uses up to ten presses that operate 24 hours a day. Staff go through airport-style security and are not allowed to take any coins of their own on site.

The coin features a design by 15-year-old David Pearce, whose work was chosen over more than 6,000 other entries in 2014.

Pearce’s design, which features the national emblems of England, Wales, Scotland and Northern Ireland – a rose, leek, thistle and shamrock – emerging from a Royal Coronet, was slightly refined with the support of renowned coin artist David Lawrence and lettering expert Stephen Raw.

Dr Kevin Clancy, director of the Royal Mint Museum, who helped choose the design, said: “The winning idea combined traditional elements but also symbolised a modern United Kingdom in an elegant and a succinct way.

“It was a young person's interpretation of an idea while still being steeped in history and tradition.”

Which old round pounds could be worth something?

While the round pounds are no longer accepted as legal tender, it's worth noting that some of the rarest old £1 coins could still be worth keeping.

ChangeChecker.org has created a graph of 24 pound coins, scaled on a “Scarcity Index” from 100 to 1 – the higher the number, the rarer the coin.

The rarest of these is the Edinburgh City design, which came into circulation in 2011, and gets the highest score possible on the index. According to The Sun, the Edinburgh design is the only £1 coin with a mintage below one million - with 935,000 coins in circulation.

On eBay, Edinburgh £1 coins have been known to sell for up to £95. However, these are only for coins in excellent condition, with other Edinburgh designs on the auction site going for a far more modest price of £5. 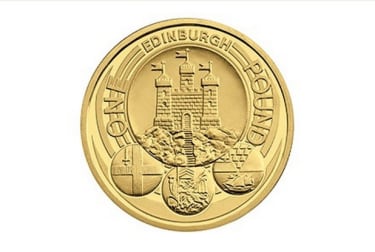 Next on the list is the London City £1 from 2010, released as part of the Capital Cities of the UK series. The design contains the City of London flag and has been selling online for £10. Prices could rise further – as high as £50 per coin, according to The Sun – as collectors try to fill the gaps in their collections. 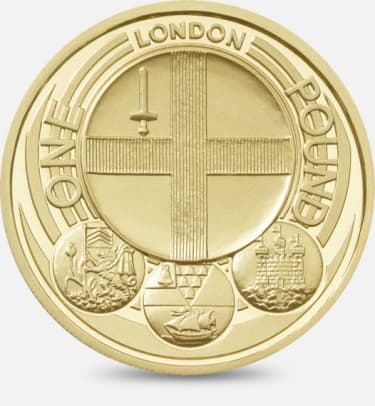 Rounding off the top three is the Royal Arms. Despite being a common pound coin design, the 2008 version is actually the third rarest, with 3.9 million in circulation, fetching up to £57 on eBay.