Easter 2020: why do we celebrate with eggs and bunnies? 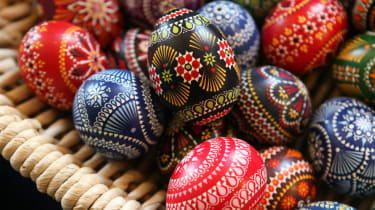 As The Guardian says: “There will be no church gatherings, no neighbourhood egg hunts, and no celebratory meals with extended family and friends.”

But the newspaper adds that many celebrations can still take place - “just a little differently” - with church services going online and children hanging pictures of Easter eggs on their windows for others to find.

Here is everything you need to know about the holiday, which commemorates the resurrection of Jesus Christ.

How is Easter celebrated?

The holiday is celebrated differently around the world. In the US, people give out painted eggs and baskets of sweets, while British children go on hunts for chocolate eggs left by the Easter Bunny.

The Greeks eat a traditional baked bread called tsoureki with red-dyed eggs, while many central and eastern Europeans paint eggs decoratively and or fight with them like conkers. Things are done slightly differently in the Czech Republic, where boys pour water on girls and symbolically whip them with willow twigs.

The willow branch also features in Easter traditions in Finland, where young children dress up as witches for the spring holiday. “The little witches then go from door to door, bringing willow twigs decorated with colourful feathers and crepe paper as blessings to drive away evil spirits, in return for treats,” says Finnish children’s culture expert Reeli Karimaki.

For Orthodox Christians in Ethiopia, Easter is the most revered religious holiday of the year. Known as Fasika, the festival features days of prayer and fasting, culminating with a magnificent feast on Easter Sunday. On the eve of the holiday, worshippers attend an hours-long church service that ends at 3am, after which they break their fast and celebrate the resurrection of Christ.

But nowhere is Easter celebrated quite as fervently as in the Philippines, one of only two predominantly Christian countries in Asia, says the South China Morning Post. “In the Central Luzon province of Pampanga, a handful of fanatical penitents willingly have nails hammered into their palms and feet before being ‘crucified’ by attendants dressed as Roman centurions,” it says.

Where does the Easter Bunny come in?

Rabbits and hares can trace their association with Easter back to the pagan origins of the festival. Symbolising fertility and rebirth, it is believed the Anglo Saxon Goddess of Spring, Eostre – who many believe the Christian event is named after – had a hare as her companion.

According to the Telegraph, the legend of the Easter Bunny can chart its roots back to German Lutherans, “where the ‘Easter Hare’ judged whether children had been good or bad in the run-up to Easter”.

The tradition of the Easter egg hunt developed as children believed the Easter Bunny laid and hid eggs around the house the night before Easter Sunday, similar to Father Christmas delivering gifts on Christmas Eve.

How did we used to celebrate Easter?

As a religious holiday dating back thousands of years, traditions associated with Easter have evolved considerably over time.

For example, there was “an old superstition that wearing new clothes on Easter meant good luck for the rest of the year”, says Mental Floss.

“You could say it has something to do with rebirth and renewal, but mostly, it sounds like an excuse to go shopping,” the site writes. Indeed, some manifestations of the tradition were not exactly what you might call pious: “in the mid-1800s, parishioners in New York arranged themselves into a little post-church fashion show as they left their Fifth Avenue churches.”

But perhaps one of the strangest Easter associations is the historical significance of the pretzel as a symbol of the holiday.

Instead, “they made small breads of water, flour and salt, to remind themselves that Lent was a time of prayer, and shaped these breads in the form of crossed arms for in those days they crossed their arms over the breast while praying”.

These were dubbed bracellae (or “little arms”), and from this Latin word, the Germanic people later coined the term “pretzel”. In early modern Germany, parents even used to hide little pretzels on Easter for children to find, in an early version of an Easter egg hunt, writes US religion scholar Ken Chitwood.

Why is the date of Easter not fixed?

The short answer is that early Christians wanted to observe Easter around the time of the Jewish festival of Passover as that is when the Last Supper is thought to have taken place.

As the Hebrew calendar is based on both solar and lunar cycles, Passover changes each year and that, in turn, makes Easter change, too.

Added to that is another layer of complexity: Western Christians, including Protestants and Roman Catholics, and their Eastern Orthodox counterparts often celebrate on different dates thanks to differences in their calendars.

In the very early days of Christianity, the First Council of Nicaea, a gathering of bishops, determined Easter would always fall on the first Sunday after the Paschal full moon - the first full moon of the spring equinox.

There have been numerous attempts to fix the date. Secularists suggest it should always fall on the second Sunday of April, while the 1928 Easter Act in Britain fixed the holiday as “the first Sunday after the second Saturday in April”. The law remains on the statute book but has never been enforced.

The Archbishop of Canterbury, Rev Justin Welby, backed an annual fixed date in 2016, suggesting it could happen within five to ten years. He said that Anglican leaders would join discussions with other church leaders about the move to fix the date for the first time and put an end to almost 2,000 years of controversy.

The plan, which would schedule the Christian festival on the same Sunday each year, “would likely be welcomed by parents and schools but may anger traditionalists” says The Telegraph.

So how early can it fall?

It is possible for Easter Sunday to fall as early as 22 March, although the last time that happened was 1881 and is not due to take place again until 2285. Its latest possible date is 25 April, which last occurred in 1943 and is due again in 2038. The most common date for Easter Sunday is 19 April, but the full cycle of dates only repeats after 5,700,000 years – so you have got a fair few chocolate eggs to get through before then.