Researchers are working to develop a “universal language” based on human linguistic traits that would allow humans to communicate with aliens, the US National Space Society (NSS) has heard.

The issue was debated at the society’s annual International Space Development Conference in Los Angeles last week, with some experts more optimistic about the prospect of a shared language than others.

A day-long “Language in the Cosmos” workshop looked at possible ways to develop a system of communicating with aliens, by examining how humans talk to one another and creating a language that can be spoken - and understood - by everyone, the Daily Mail reports.

Linguists Jeffrey Punske, from Southern Illinois University, and Ian Roberts, from the University of Cambridge, argue that there is a universal grammar of languages on Earth, and that this grammar may extend to extraterrestrial languages, especially in their syntax, or sentence structure.

Speaking to CNet, Punske said: “We can expect that extraterrestrial languages have a vocabulary consisting of building blocks of meaning that can be combined to create more complex meanings.

“While the possibility of human contact with extraterrestrials seems remote, and the possibility of communicating successfully with them seems even more remote, the laws of physics, information theory, logic and mathematics could provide some common ground to start from.”

Linguist and author Noam Chomsky elaborated on this theory at the conference, saying: “To put it whimsically, the Martian language might not be so different from human language after all.”

Meanwhile, Douglas Vakoch, the founder and president of Messaging Extraterrestrial Intelligence (METI), said he had been using mathematics to “work on a universal language to let us speak to aliens” and had “started messaging extraterrestrial intelligence” in late 2017.

However, communication expert Gonzalo Munevar, from the Michigan-based Lawrence Technological University, said that aliens would probably have different brains to humans - or no brains at all - and therefore “might perceive and conceptualise their universe in ways that remain forever mysterious to us”.

The Smithsonian Institution’s Air & Space agrees that Munevar’s scepticism “seems in order, considering that we humans are still not close to fully understanding other intelligent species on our own planet, such as dolphins - even though we’re closely related to them. And no relationship whatsoever would be expected with an alien species.” 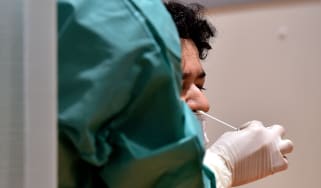