Show me the Monet: chance to buy a Banksy... if you have £5m to spare

Art collectors will get the chance to bag themselves a Banksy next month - but they should expect to pay up to £5m for the privilege.

The Bristol street artist’s 2005 work Show me the Monet, a subversive take on Claude Monet’s masterpiece Bridge Over a Pond of Water Lillies (1899), will go under the hammer at a live-streamed Sotheby’s auction on 21 October. The sale comes a year after Banksy’s Devolved Parliament sold at Sotheby’s London for a record-breaking £9.9m ($12.2m).

The latest Banksy painting to hit the market is expected to sell for between £3m and £5m and is a highlight of Sotheby’s third live-stream auction event, “Modernités / Contemporary”, which brings together two art sales held in sequence from Paris and London.

Alex Branczik, Sotheby’s European head of contemporary art, said: “In one of his most important paintings, Banksy has taken Monet’s iconic depiction of the Japanese bridge in the Impressionist master’s famous garden at Giverny and transformed it into a modern-day fly-tipping spot.

“More canal than idyllic lily pond, Banksy litters Monet’s composition with discarded shopping trollies and a fluorescent orange traffic cone. Ever prescient as a voice of protest and social dissent, here Banksy shines a light on society’s disregard for the environment in favour of the wasteful excesses of consumerism.

“Recent years have seen seminal Banksys come to auction, but this is one of his strongest, and most iconic, to appear yet. From Love is in the Bin, to the record-breaking Devolved Parliament, to this take on Monet, October just wouldn’t be complete without a big Banksy moment.”

Show me the Monet hails from a series collectively known as the “Crude Oils”, comprising what Banksy has termed “remixes” of canonical artworks.

The series also includes tongue-in-cheek tributes that show Vincent van Gogh’s Sunflowers with the flowers wilting or dead in their vase; Edward Hopper’s Nighthawks augmented by an angry man in Union Flag boxer shorts moments after breaking the bar window with a chair; and Andy Warhol’s Marilyn Monroe re-faced with Kate Moss.

Art investors are banking on Banksy 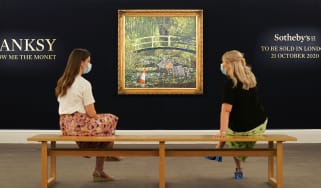 Art investors are banking on Banksy