EU referendum: How did your area vote?

The results are in: Britain has chosen to leave the European Union.

In a vote that defied pollsters, commentators and even the ever-reliable high-street bookmakers, 52 per cent of the nation opted for Brexit.

How did the forecasters get it wrong? Several swing areas ultimately plumped for Brexit, while the Leave campaign did far better than predicted in many areas they were already expected to win. 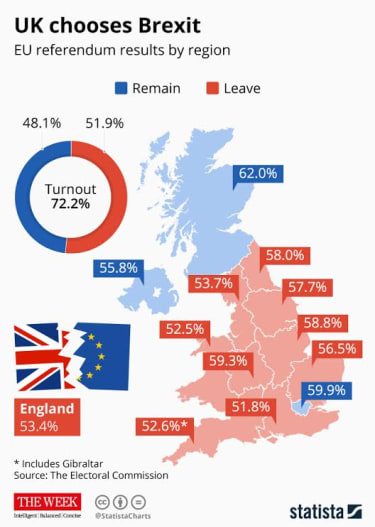 Most controversially, taken as a whole, Scotland gave a resounding "yes" to Remain. While England led the Brexit charge with 53.4 per cent, 62 per cent of voters north of the border wanted to stay.

During campaigning, one pollster said there was "little evidence" that Scots would demand another independence referendum if their vote differed significantly from that of the English.

However, at that time, polls gave Remain a comfortable lead. So, could a Scottish backlash be on the way?

It's certainly possible. The Scottish National Party rode into Holyrood in May on a manifesto which outlined the circumstances for a second independence vote in the event of "significant and material" developments -"such as Scotland being taken out of the EU against its will", adds the Daily Telegraph.

So far, Sturgeon appears to be hedging her bets until the dust settles. However, the First Minister commented this morning that "Scotland sees its future as part of the EU", indicating that this is not the last we have heard about the break-up of the United Kingdom.

In Northern Ireland, meanwhile, which also voted to remain, Sinn Fein chairman Declan Kearney said Westminster had "forfeited any mandate to represent the economic or political interests of people in Northern Ireland".

Infographic by www.statista.com for TheWeek.co.uk.