Carabao Cup: Arsenal travel to Liverpool with Mesut Ozil but not Granit Xhaka

by The Week team
Mesut Ozil and Granit Xhaka celebrate a goal for Arsenal&nbsp;

It’s one in and one out at Arsenal as they travel to Anfield this evening to face Liverpool in the Carabao Cup.

The services of Granit Xhaka won’t be required but the Daily Mail reports that there will be a rare sighting of Mesut Ozil after “heart-to-heart talks” with Gunners boss Unai Emery.

Xhaka won’t travel with the squad today, and Emery said the club captain should apologise for throwing a strop at Arsenal fans as he was substituted on Sunday.

“Yes,” said Emery, when asked by the BBC if the Swiss should say sorry. “We make mistakes, we need to apologise and we suggested for him to do that. He knows he was wrong and he feels inside very deep.”

But according to the Mail, Xhaka will not apologise and there is growing concern within the club about his “mental well-being”.

The paper claims that Xhaka will be offered counselling by Arsenal following Sunday’s incident when he told fans to “f**k off” as he walked off the pitch.

Describing Xhaka as “devastated and sad” following Sunday’s strop, Emery refrained from saying whether he would continue to wear the captain’s armband in league matches.

“I don’t want to think about that,” the Spaniard said yesterday. “It is not easy for him and for the team. We spoke [on Monday], and Sunday night also, and this morning.”

The Mail says that not only will Xhaka sit out tonight’s clash with Liverpool but there are doubts as to whether “he will be in the right frame of mind” to play against Wolves on Saturday.

As for Ozil, Emery has barely called on the German midfielder this season, leading to rising anger among some fans, who believe he is the man to reignite the Gunners’s ailing season.

But tonight against Liverpool in the fourth round of the League Cup he’ll have the chance to show what he can do if the mood takes him.

“He’s in the group so he has a chance to play,” said Emery. “We have had this morning a very good conversation, Mesut and me, and I said to him I haven’t changed my idea about him. He knows what I want from him because it’s the same as last season.”

Asked what it was he wanted from Ozil, Emery replied: “We need his quality, his skill and his consistency. We need his positive mentality and then he will help us on the pitch. That’s the next step.”

Ozil to the rescue

Ozil has been absent from the last six Arsenal games but Emery says he is “training well” and contributing ideas, which is why the German playmaker is expected to start at Anfield.

In truth, however, Emery has been strung into recalling Ozil after the shambles at the Emirates on Sunday when Arsenal squandered a two-goal lead against Crystal Palace to draw 2-2.

The Gunners looked headless at times - not the first occasion this season - and Emery is hoping Ozil will bring not just some creativity but some composure to his squad. 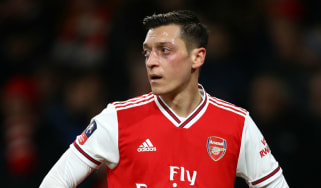