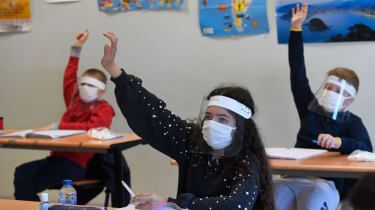 Widespread claims that schools are primary drivers of Covid outbreaks have been undermined by a new study that suggests children aged under 15 are about half as likely as adults to catch and spread the coronavirus.

Researchers in Iceland monitored every child and adult in the country who was quarantined after possible exposure to the virus. Using contact tracing and genetic sequencing to identify links between outbreak clusters, the study of 40,000 people found that children “can and do get infected and transmit to others, but they do both less frequently than adults”,  according to a spokesperson for the experts.

The analysis - by teams from Iceland’s Directorate of Health and Reykjavik-based firm deCODE genetics - is “one in a recent flurry of large-scale studies that support the conclusion that infected adults pose a greater danger to children than kids do to adults”, says National Geographic.

The findings are expected to influence the ongoing debate about whether schools worldwide should be shut to prevent further outbreaks.

In the UK, the pandemic has led to low attendance, staff shortages and rising infection rates among secondary school pupils. But the government has used “emergency powers to threaten legal action against headteachers in England”  who wanted to allow students to learn remotely in the run-up to the Christmas break, even though Covid restrictions are set to be relaxed between 23 and 27 December, The Guardian reports.

The veto on remote learning has been criticised by experts including Scientific Advisory Group for Emergencies (Sage) member Stephen Reicher, a professor of social psychology at the University of St Andrews.

Reicher told the newspaper that the government was taking contradictory approaches in allowing families to mix over Christmas after having denied families the right to withdraw their children from school beforehand so that they can isolate in order to minimise infection risks.

Looking to next year, the BBC reports that mass Covid testing of secondary-school pupils in England is to be greatly increased in January, in an attempt to reduce the numbers being sent home.

Education Secretary Gavin Williamson said the “huge expansion” of testing would be a “milestone moment” in keeping schools open.