Raheem Sterling dropped by England after canteen kerfuffle with Gomez

England manager Gareth Southgate has dropped Manchester City Raheem Sterling from the squad for Thursday’s Euro 2020 qualifier against Montenegro on Thursday after what The Guardian describes as a “bust-up with Joe Gomez at St George’s Park”.

The incident reportedly happened in the players’ canteen on Monday and had nothing to do with who got the last slice of treacle tart. According to the Daily Mail it was a consequence of “bad blood spilled over” from the previous day’s Premier League clash between City and Liverpool. Sterling and the Reds’ defender had clashed on the pitch during City’s 3-1 defeat and the Mail claims that Sterling “reacted aggressively after being greeted warmly by Gomez in the players’ canteen”.

The paper says that Gomez had offered Sterling his hand but the response of the City star was an “attempt to grab his team-mate by the neck”. Apparently the rest of the England squad initially thought Sterling was larking about but “it soon became clear that he had lost control and the pair were separated”.

The Guardian reports that Sterling apologised for his behaviour but Southgate nonetheless decided to make an example of him.

“We have taken the decision to not consider Raheem for the match against Montenegro on Thursday,” he said. “One of the great challenges and strengths for us is that we’ve been able to separate club rivalries from the national team. Unfortunately the emotions of Sunday’s game were still raw. My feeling is that the right thing for the team is the action we have taken. Now that the decision has been made with the agreement of the entire squad, it’s important that we support the players and focus on Thursday night.”

The Daily Mail speculates that Sterling may have reacted the way he did after he was mocked on social media for “coming off second-best physically” against Gomez at Anfield. He has since issued an apology on social media, saying: “Both Joe and I have had words and figured things out and moved on. We are in a sport where emotions run high and I am man enough to admit when emotions got the better of me... this is why we play this sport because of our love for it – me and @joegomez5 are good we both understand it was a 5-10 second thing... it’s done, we move forward and not make this bigger than it is. Let’s get focus on our game on Thursday.”

Southgate’s decision is a courageous one, given Sterling’s form in recent months. The City star has scored eight goals and provided five assists during the Three Lions’ Euro 2020 qualification and should England fail to score on Thursday the manager’s decision to axe his most potent attacking weapon may be questioned. 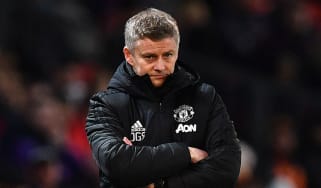 ‘An emotional night’: fans applauded on return to stadiums

‘An emotional night’: fans applauded on return to stadiums