The centre of the park, not the opponents, is the biggest problem for the Three Lions

England need only a point tonight from their match against Montenegro to qualify for next summer’s European Championships.

It should be a formality in what is the Three Lions’s 1,000th international.

With the greatest respect to this evening’s visitors to Wembley it’s a shame that such a landmark won’t be achieved against one of football’s glamour sides such as the Germans, Brazilians or the Italians.

On a more positive note, however, at least the presence of Montenegro should enable England to win - and therein lies the worrying issue for head coach Gareth Southgate.

The distinctly mediocre quality of the opposition in England’s Euro 2020 qualifying group hasn’t allowed him to gauge just how good his squad is.

So they thrashed Bulgaria 6-0 on the road. Big deal... The likes of France, Spain and Holland will not roll over so easily next summer.

But for a lapse of concentration last month against the Czech Republic, England would have a perfect record from their qualifying group.

Three points clear of the Czechs nonetheless, the Three Lions’s goal difference is +20, 18 more than their rivals, and an indication of the gulf in quality between them and the rest of group A.

England have rarely been tested in qualifying and even without the self-inflicted absence of Raheem Sterling this evening, it’s unlikely that Southgate’s men will break into much of a sweat in easing to victory.

Would Southgate have dared dropped Sterling - who has scored ten goals in his last ten internationals - if England’s opponents this evening had been Poland or Portugal? Unlikely.

Instead he’s made a point to his squad about discipline while also opening the door for either Jadon Sancho or Callum Hudson-Odoi (both 19) to show what they can do in attack.

England have impressive strength of depth in attack, as they do in defence, but as The Times explains, the same can’t be said of the midfield, “where the search for the blend that will make England truly competitive next summer continues”.

Southgate has acknowledged this weakness, telling reporters: “We’re still seeking that pivot who can do all sides of the game. And if any of you see him, by all means, throw your hat on him.”

The Times describes Eric Dier and Fabian Delph as “yesterday’s men” and believes Harry Winks lacks the international quality to be the pivot Southgate so desperately needs.

Declan Rice, the 20-year-old West Ham midfielder, has promise but he’s still learning his craft at this level.

What Southgate wouldn’t give for a “player in the style of Liverpool’s Fabinho”, says The Times, or for that matter the trio that helped France win the World Cup last year: N’Golo Kanté, Blaise Matuidi and Paul Pogba.

The Daily Telegraph says that with Ross Barkley and Jordan Henderson absent this evening for different reasons, Leicester City’s James Maddison may get the chance to show what he can do in the centre of the park.

Unfortunately this week the headlines have all been about that spat between Sterling and Joe Gomez, but the issue that really threatens England’s chances of finally winning the Euros don’t originate in the canteen but in the engine room.

Raheem Sterling has the hump, but he’ll start in Kosovo 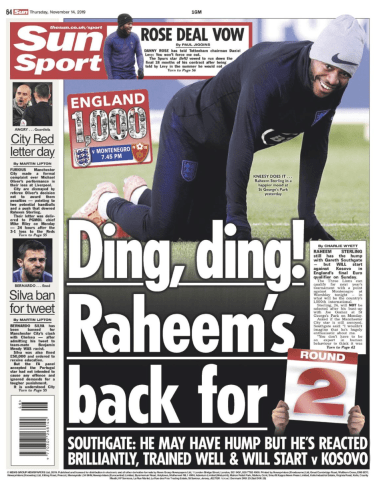