Liverpool were given a lesson in humility by League One Shrewsbury Town last night as the European champions were held to a 2-2 draw in their FA Cup fourth-round tie.

A draw was the one result Jurgen Klopp didn’t want, even more than a defeat, which wouldn’t have disappointed the Reds boss too much as his side look to defend their Champions League crown while also clinching their first Premier League title in 30 years.

But thanks to a stirring Shrewsbury comeback Liverpool will have to host the League One outfit at Anfield on 4 February - a fixture that will take place during the inaugural Premier League winter break.

Having already played 37 matches this season, one more game is not what Klopp wanted as the business end of the season nears.

Yet Klopp was punished for his complacency in fielding a different starting XI to the one that took the field against Wolves on Thursday.

One of those newcomers, Curtis Jones, gave Liverpool the lead on 15 minutes, and then an own goal from Donald Love early in the second half doubled the visitors’s advantage.

Done and dusted? Not a bit of it as the side lying 16th in the third tier of English football scored twice in ten minutes to level the score.

Both came from the boot of substitute Jason Cummings, the first a penalty after a foul by Yasser Larouci on Josh Laurent and the second 15 minutes from time.

Shrewsbury Town secure a dream trip to Anfield in the #EmiratesFACup thanks to an incredible second-half comeback! pic.twitter.com/yuYLO7od9E

Klopp sent on Mohamed Salah and Roberto Firmino late on in a desperate attempt to avoid a replay, but Shrewsbury held on for a lucrative trip to Merseyside next week.

“Going to Anfield is fantastic,” said Shrewsbury boss Sam Ricketts. “I said to the players you could have won it but I bet you all wanted to go to Anfield, didn’t you?

“It’s great for the supporters, the chairman, the club. It could bring in new players or help improve facilities, something that will bring long-term benefit to this club.”

Congrats from Klopp - but kids will play

Klopp was magnanimous in what must have felt like a defeat given the way the home team celebrated at the final whistle, along with their fans who invaded the pitch in delight.

“We don’t have enough time to say all the things which weren’t right today,” reflected the German. “But well deserved for Shrewsbury, it was the minimum they deserved. Congratulations to them.”

However, because of the Premier League winter break scheduling the Liverpool boss confirmed that his first-team stars will miss the replay and that the club’s kids will play. Also, reserve coach Neil Critchley will be in the dugout and take charge of the team.

Klopp told the BBC: “I said to the boys already two weeks ago that we will have a winter break, which means we will not be there. You cannot deal with us like nobody cares about it. I know that it’s not very popular but that’s the way I see it.

“The Premier League asked us to respect the winter break. That’s what we do. If the FA doesn’t respect that, then we cannot change it. We will not be there.

“We have to respect the players’ welfare. They need a rest. They need a mental rest, a physical rest, and that’s what the winter break is all about. We had to make these decisions beforehand because these boys have families.”

Manchester Utd put on a ruthless display in their #EmiratesFACup fourth round fixture 🔥 pic.twitter.com/ea21jDaMO7

The two Manchester clubs did what Liverpool failed to achieve and cruised through to the fifth round by brushing aside weaker opposition.

Manchester City thrashed Fulham 4-0 in a performance worthy of the holders with two of their goals coming from Gabriel Jesus, but manager Pep Guardiola was not impressed that only 39,000 of the Etihad’s 55,000 seats were occupied.

“Hopefully in the next game against [Manchester] United [on Wednesday], our fans can come and make the stadium full,” he said. “Hopefully they will support us more.”

Six of the best

The game against United is Wednesday’s second leg of the Carabao Cup semi-final and the Red Devils warmed up for the clash with a 6-0 hammering of Tranmere Rovers.

Five of the goals came in the first half but that didn’t prevent United fans expressing their anger through song with the way the club is being run by the Glazer family.

Shrewsbury and Jason Cummings are FA Cup ‘kings for the day’ 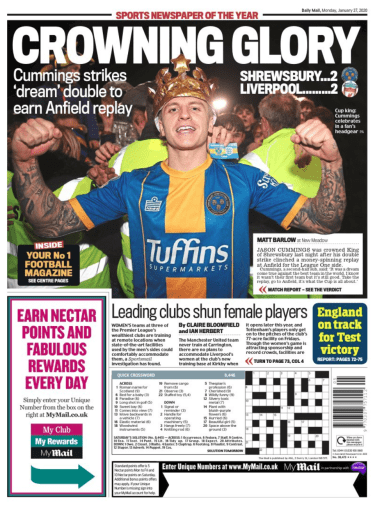