Gunners reach the fifth round where they will face Portsmouth

Arsenal’s renaissance under Mikel Arteta continued with a comfortable 2-1 win over Bournemouth in the FA Cup fourth round last night.

The Gunners’s reward for their victory is a fifth-round trip to another stretch of the south coast to play Portsmouth.

If Arsenal play against Pompey like they did in the first half last night they’ll have no trouble seeing off the League One side.

Arteta fielded a mix of youth and experience, including a couple of 18-year-olds in Bukayo Saka and Gabriel Martinelli, and 20-year-old Eddie Nketiah up front.

All three repaid the faith of their manager, as did another youngster, Joe Willock, in an impressive first 45 minutes.

Willock and Martinelli combined after just five minutes to tee up Saka for a thunderbolt strike and the goalscorer then turned provider midway through the first period, delivering a well-judged cross from the left that Nketiah hammered past Bournemouth keeper Mark Travers.

The Cherries got a goal back deep into stoppage time through Sam Surridge but it couldn’t mask the gulf in quality between the sides.

The defeat will increase the pressure on Cherries boss Eddie Howe, whose team have won just three of their last 15 matches in all competitions.

For Arteta, the win was further evidence that Arsenal are starting to move in the right direction with the Spaniard having lost just once in his eight games in charge.

There is still a long way to go but the Gunners boss was happy with what he saw at the Vitality Stadium.

“I knew it was going to be a tough game and we played a really young squad,” said Arteta. “I wanted to see the reaction and I was very pleased because I saw a lot of things I really liked.”

Asked to be more specific, Arteta said: “We played with that accountability, making decisions and I really liked it. They were terrific with their work-rate, showed courage to make those big decisions and not to play safe.”

The Arsenal boss was particularly impressed with Nketiah, a player he recalled from a loan spell at Leeds last month and who last night gave a glimpse of his raw talent.

“Eddie Nketiah was terrific,” said Arteta. “He was on the wing then three seconds later he was in the middle and scoring a goal. This shows me he will score goals and the way he worked without the ball was excellent.”

While Arsenal will fancy their chances of reaching the quarter-finals, the last-16 draw will mean one of the big guns goes out.

Assuming Liverpool beat Shrewsbury in their replay next week, the Reds will play Chelsea at Stamford Bridge in the fifth round.

Another all-Premier League clash will be between Norwich and the winner of the replay between Southampton and Tottenham.

Holders Manchester City travel to Sheffield Wednesday while Manchester United are also on the road, playing the winner of the replay between Northampton Town and Derby County.

Victory for Derby will see Wayne Rooney go up against his former club. 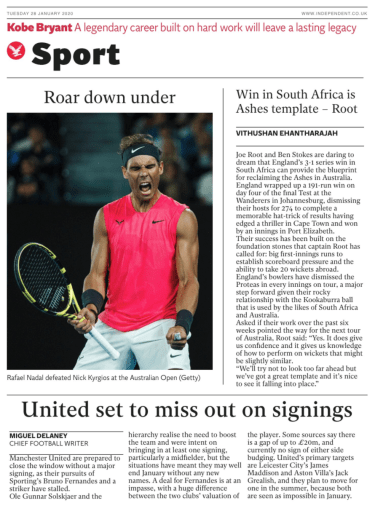