Uefa conference call: what’s on the agenda for European football?

Governing body will today speak with the 55 national associations

Uefa will host a video conference call today with Europe’s 55 national football associations in a bid to bring clarity to a chaotic situation.

Since sport went into shutdown at the start of last month, football has been in limbo with clubs, broadcasters and supporters uncertain of what the future holds.

According to The Guardian, Uefa is eyeing a resumption date of early June having concluded that the initial plan to start playing again in May is unrealistic given that coronavirus is continuing to spread across the continent.

The Times says a second idea that will be examined during today’s conference is to resume this season’s matches in August with next season (2020-21) “delayed and shortened”.

The situation is further complicated by the impact of the virus on different countries.

In Germany - where there have been far fewer deaths than in Italy - the Bundesliga is drafting a plan to recommence matches behind closed doors with players and coaches being tested for the virus.

Serie A, on the other hand, is unlikely to resume for several months given the gravity of the situation in Italy.

Uefa will also discuss the Champions League and Europa League during the conference call, which will be chaired by president Aleksander Ceferin.

Sky Sports reports that it’s Uefa ambition to finish the competitions, even if it involves “reducing quarter-final and semi-final ties to one game over a neutral venue”.

As well as the Uefa conference, today will also see a resumption of talks between the Professional Footballers’ Association (PFA) and Premier League clubs about possible salary reductions.

Yesterday Tottenham chairman Daniel Levy announced that the club’s non-playing staff have taken a wage cut, and he warned that the enormity of the situation in the sport must “result in players and coaches doing their bit for the football ecosystem”.

While many players in Italy, Spain and Germany have accepted wage freezes or reductions to help their clubs, there is allegedly reluctance within the Premier League to do likewise.

The Times says that “some clubs have expressed concerns that agents will try to stop players accepting a pay cut”.

Pressed on the issue by the paper, the PFA’s chief executive Gordon Taylor explained that they were seeking a uniform response to the crisis.

“We want to hold things together and have a joint approach rather than have an ad hoc approach where each club does their own thing,” he said.

A decision about Premier League wage cuts is expected by the end of the week but the chief executive of one top-flight club, who wished to remain anonymous, told the Times: “We are facing a situation where we are likely to lose gate money by playing behind closed doors, our income has gone off a cliff edge and costs remain the same. Something has got to give.” 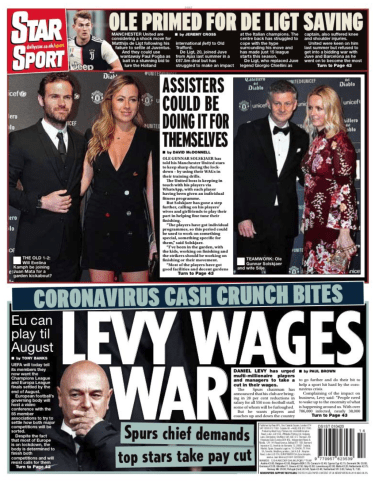