What’s at stake in the season finale at Yas Marina Circuit?

by The Week team
The F1 Abu Dhabi Grand Prix is held at the Yas Marina Circuit&nbsp;

Lewis Hamilton and Mercedes may have won the Formula 1 titles but there’s still plenty of points to play for in the final race of the season.

Hamilton and team-mate Valtteri Bottas have the top two spots in the drivers’ championship secured so the fight for third place will be a major focus in the day-night race in Abu Dhabi.

Max Verstappen’s victory at the Brazilian GP on 17 November moved him to third in the drivers’ standings. He has 260 points while Ferrari’s Charles Leclerc is fourth with 249.

With an 11-point advantage over Leclerc, Verstappen can seal third spot if he finishes first or second in Abu Dhabi. Ferrari’s Sebastian Vettel is confirmed as the 2019 fifth-place finisher.

Speaking ahead of the final race Verstappen said: “After a great weekend in Brazil, the team is in good spirits to have one final go at it in Abu Dhabi.”

Mercedes driver Bottas will start at the back of the grid because of an engine-related penalty.

After their podium places in Brazil Toro Rosso’s Pierre Gasly and McLaren’s Carlos Sainz are currently sixth and seventh in the championship, level on 95 points. They will battle for sixth with Red Bull’s Alex Albon, who has 84 points.

Kubica said: “Abu Dhabi is quite a difficult track, but we will try to optimise the car the best we can for the last race of the season. It will be my final grand prix with Williams, and so I would like to put everything together for the boys and for the team.”

Hulkenberg added: “Just to be clear, I don’t feel like I’m retiring. As a race driver, I don’t feel I’m leaving Formula 1. I might not be on the grid [in 2020], but if there is an opportunity, I’m going to be ready.” 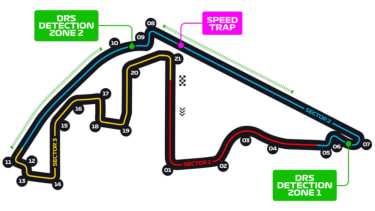 When are the practice sessions?

Qualifying in Abu Dhabi starts at 1pm on Saturday 30 November.

What time does the race start?

What the drivers and teams are saying

“The underperformance in Brazil means we head to Abu Dhabi with a point to prove. Yas Marina has been a good circuit for us in the last years and we’ll push hard to continue in the same way. The race is one last opportunity for us to add another victory to the record of the W10 and it’s one more chance to put on a great show for the fans before the winter break.”

“Abu Dhabi is the last race of what has been a long season for everyone. For us at Scuderia Ferrari, it was a year of new beginnings, with team members taking on new roles and Charles [Leclerc] in his first year with us and our aim was to build the foundations for the future.”

“We move from a flowing track like Interlagos to a tight and twisty circuit at Yas Marina where the car needs to be set up in a completely different way to Brazil in order to get the best out of it. This is always a challenge in Abu Dhabi as we transition between day and night practice sessions with FP2 the most important session as it gives you the most representative read of qualifying and race conditions.”

“It would be nice to continue the momentum we’ve had during the last part of the season through to the end and secure another points finish. We have a bit of pressure on us in the race for fifth in the constructors’ championship, but it means we have something to fight for and I like that feeling.”

“As always, we’re going to try and pick off as many places as we can. The twilight conditions in Abu Dhabi are unique but I’m pretty zoned in from start to finish so it’s not really a distraction. You almost forget you’re driving in the evening because the lights work so well.”

“It’s important we end the season on a high in Abu Dhabi. It’s been a long year and there is still a lot at stake. Everybody is starting to think about next year, but you want to finish the season well so that you can go on holiday feeling happy. Nobody wants to have a bad final race so we will do all we can to end the year with a strong performance.”

“I’ve got mixed feelings as it is going to be sad to do the last race of the year, but I’m also excited to get back out to the warm weather of Abu Dhabi. I have good memories there as winning the FIA Formula Two Championship last year was a really special feeling, and something I will remember for a long time to come.”

“This year - our fourth - it’s been a disappointing season in terms of performance. That doesn’t mean that all the work we’ve done behind the scenes isn’t great. As I’ve said many times, the team has been working very well and we’ve got the maximum, if not more than the maximum, of the car most of the time. We need to see the positives, and that’s that we’ve gotten stronger. We’ve been able to analyse more and we’ve been able to get ready for 2020.”

#DidYouKnow | The #AbuDhabiGP is the only race on the #F1 calendar to be named after the city it is held in rather than the country 👀#essereFerrari 🔴 pic.twitter.com/fn9Y4gNigi

“Ferrari were off the pace once again [in Brazil] and it’s fair to say their form peaked with a hat-trick of victories for Charles Leclerc and Sebastian Vettel straight after the summer break. Their class-leading engine will make them a threat for pole position on Saturday but Sunday’s race might boil down once again to a shootout between Verstappen’s Red Bull and Lewis Hamilton’s Mercedes.”

“Hamilton insists he is ready to rise to the challenge and appeals at 7/4 to finish the year on a high note in our Abu Dhabi Grand Prix predictions.”

“Unsurprisingly, Hamilton comes in as the favourite to win in Abu Dhabi. The Brit has won more races here than any other driver and can extend that lead in the final race of the season.”

“Will the season finale be as competitive [as Brazil]? We can expect Yas Marina will suit Mercedes rather better. Not just being away from the high altitude of Interlagos, but also because the cars spend a lot more time braking and cornering at this circuit, which will suit the higher-downforce W10. Mercedes’ track record here is also formidable. No other team has taken pole position or won at this track during the V6 hybrid turbo era.”

Prices according to Oddschecker

Formula 1 fans can also watch the action live on Now TV. Viewers can subscribe to a Sky Sports Day Pass via Now TV for just £9.99, the most economical way of watching each race.