F1: Mark Webber tips Lewis Hamilton and Ferrari to win the titles in 2020

Ferrari driver Sebastian Vettel admits he must do better next season

In 2019 Mercedes star Hamilton secured his sixth career title after 11 wins from the 21 races. The British driver finished top of the standings with 413 points while his Silver Arrows team-mate Valtteri Bottas was second with 326 points.

Writing in a column for Formule1.nl, Webber, 43, backed Hamilton for the drivers’ title ahead of his main rivals, Red Bull’s Max Verstappen and Ferrari’s Charles Leclerc.

The Australian also thinks Ferrari have a strong chance of securing the constructors’ gong. In 2019 the Italians finished second, 235 points behind rivals Mercedes.

“Provided Leclerc and Sebastian Vettel manage to score at least regularly,” Webber said. “For the constructors' championship, it may look good for Ferrari, though I think Lewis will still show his superiority in the drivers’ classification for a whole season.

“I look forward to seeing if Hamilton can match the seven world titles of Michael Schumacher while he has to deal with Leclerc and Verstappen.”

Vettel: I know I can do better

After finishing fifth in the 2019 drivers’ championship Ferrari’s Sebastian Vettel admits that next season he “must do better”.

In 2019 the four-time F1 world champion only won one race, the Singapore Grand Prix in September, while also finishing on the podium a further eight times.

Speaking to F1.com the German said: “We didn’t have the year we were hoping for, full stop. I think the reasons are clear, the lessons are clear and now it’s up to us to make sure to take them on board. As a team we must perform stronger. As an individual I think I must, I can… do better.

“It wasn’t a great year from my side. I don’t think it’s as bad as it looks because there were a lot of things leading to not a great picture at the end of the year.

“But I’m the first one to look at myself and, if I’m honest, I know I can do better. That’s for sure the target for next year, to do a step forward.”

When asked about the partnership with Honda, Horner told Motorsport.com: “I think it’s been a transitionary year for the team. It was always going to be - the first engine change we’ve had in 13 years.

“And the partnership with Honda has worked tremendously well, from the first race, the podium in Melbourne. You know, with each engine has been introduced, we're getting better and better.

“Reliability has been been strong. The three pole positions, albeit we only kept two of them, three victories. Nine podiums is a really impressive performance this year.

“This really has been beyond expectation and in many respects the relationship with Honda has been fantastic, the reliability, the performance increased with each engine. It’s been very much a highlight.”

On Red Bull’s chances for next year, Horner added: “I think with stability of the regulations going into 2020 hopefully we can be the challenger team next year.

“Mercedes has had another very strong year, very much the benchmark still, and it feels like we’re definitely getting closer.

“I think generally we’ve developed the car well this year. I think Honda have done a great job with each introduction on the power unit, but we know there’s still a gap to close to Mercedes, and we have to keep pushing.” 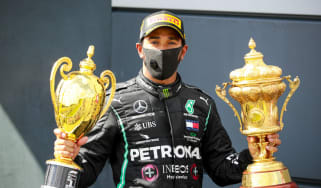