Conservatives’ lead narrows on the eve of general election 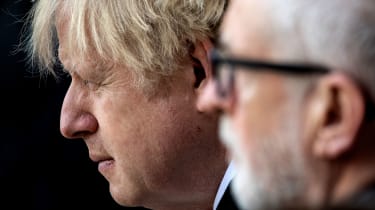 A new survey suggests that the election race has tightened and Boris Johnson can no longer be sure of securing a Commons majority.

The polling model that accurately called the outcome of the 2017 general election now predicts that the Tories are on course to win 339 seats, Labour 231, the Liberal Democrats 15 and the Scottish National Party 41 in tomorrow's election.

However, the poll’s range of possible outcomes stretches from 367 Tory seats to only 311. “Based on the model we cannot rule out a hung parliament,” Anthony Wells of YouGov said.

The Times says the finding “sets the last 24 hours of the five-week campaign alight”.

The latest poll echoes a Conservative Party memo that says Corbyn’s chances of becoming prime minister have been “seriously underestimated” and that gains of 12 seats by the Lib Dems, the SNP and other minor parties could remove Johnson from office.

Meanwhile, Sir John Curtice, Professor of Politics at Strathclyde University, has pointed out that a majority is vital for Johnson’s Brexit plan, “because none of the other parties likely to win seats, including his former allies in the Democratic Unionist Party (DUP), is in favour of passing the prime minister's Brexit deal into law”.

Writing for the BBC, Curtice says that the fate of Labour’s “red wall” is key to the outcome and points out that the wall includes many “leave-inclined” seats which swung closer to the Tories in 2017.

Turning to the Lib Dems, he said the election could leave the party “with a significantly stronger foundation on which it might be able to rebuild” or it could simply remain “the relatively small parliamentary force it has been since suffering heavy losses in 2015”.

The stakes are high north of the border, he continues, as “the political mood in Scotland for the next few years may well be determined by their performance in this election”. If the SNP does well, a second independence referendum could be on the cards.

The analyst also argues that if tactical voting campaigns are successful, the Conservatives will win fewer seats than would otherwise have been anticipated, which could dash their chances of a majority.