Rats and fleas off the hook: humans passed Black Death to each other

The Bubonic Plague of 1348 was actually a pneumonic plague, say scientists studying skeletons dug up in London 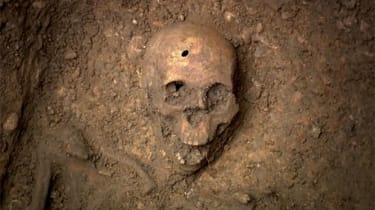 RATS and fleas have been unfairly implicated in the spread of the Black Death, according to scientists studying the remains of Londoners who died in the 14th century.

Around 60 per cent of people living in the capital died at the peak of the Black Death pandemic, which arrived in England from central Asia in 1348. But, following excavations of medieval graves in the course of Crossrail construction works, scientists now believe that a death rate of such magnitude would only have been possible if the plague had been airborne.

Skeletons dug up in Charterhouse Square, just north of the City of London, still contained the DNA of the bacterium responsible for the plague: Yersinia pestis. Researchers compared this DNA with that from a strain of the plague which recently killed 60 people in Madagascar. They found the medieval strain was no more virulent than the modern strain.

So why did the 14th-century strain kill so many more people?

The medieval Black Death is also known as the Bubonic Plague. Bubonic plagues infect victims by entering through the skin: in medieval London, it was thought, this was courtesy of fleas carried by the black rat.

However, scientists now believe the only way that the Black Death could have killed so many people in 1348 was if it was actually a pneumonic plague – an airborne version of the disease which can be spread from person to person through coughing.

Dr Tim Brooks from Public Health England at the Porton Down research facility has a theory. Speaking of rats and fleas, Dr Brooks told the Guardian: "As an explanation for the Black Death in its own right, it simply isn't good enough. It cannot spread fast enough from one household to the next to cause the huge number of cases that we saw during the Black Death epidemics."

Scientists believe the poor health of the population of London was also a factor in the high death rate. The skeletons in Charterhouse Square showed evidence of rickets, anaemia and childhood malnutrition.

The scientists’ findings will be explored in a Channel 4 documentary, Secret History: The Return of the Black Death, on Sunday 6 April.