Instant Opinion: woke revolution is ‘burning itself out’

1. James Marriott in The Times

Why PC-culture is on its way out

The woke revolution is burning itself out

“A social revolution derives its power from anarchic, outsider energy. But now Marks & Spencer has released an LGBT sandwich, Gillette has addressed toxic masculinity in a viral video and Pepsi has released an advertising campaign implying that its carbonated cola drink may be the answer to police brutality. The rebels are being absorbed by the establishment - they always are.”

2. Vince Cable in The Guardian

On the future of progressive politics

We can’t wish away first past the post. Centre-left parties have to find common ground

“The fervent Brexiteers who won this election and the radical socialists who still control the Labour party believe the ‘liberal establishment’ has had it too good for too long, with weaselly compromises; muddy, soulless, consensus politics; the middle way to nowhere. This elite ‘sold out the country’ to foreigners in Brussels, to exploitative multinationals or to some other malign force standing between the government and the people.”

3. Celia Walden in The Telegraph

Why memorials should not be Insta-backdrops

“Implement a very specific form of community service that involves the enforced watching of a three-hour documentary on 9/11, on the Holocaust, on Auschwitz (where, earlier this year, custodians were forced to plead for respect after visitors posted selfies on the railway tracks leading into the former concentration camp); on the history of the Sacré Coeur (where visitors are banned from taking selfies); and on Catholicism. On the basis that place matters more than a little red heart from a bored stranger.”

On speaking loudly and carrying a small stick

How Trump lost his trade war

“Trade wars rarely have victors. They do, however, sometimes have losers. And Donald Trump has definitely turned out to be a loser. Of course, that’s not the way he and his team are portraying the tentative deal they’ve struck with China, which they’re claiming as a triumph. The reality is that the Trump administration achieved almost none of its goals; it has basically declared victory while going into headlong retreat.”

5. Andrea Mammone in The Independent

On the erosion of solidarity for European friends

As an EU migrant, I’m worried I no longer have a role to play in Boris Johnson’s Brexit Britain

“The absurd self-portrait of a country which claims to represent the western model for liberal democracy doesn’t have many fans on the continent. Talk to people in Brussels and other European cities and you’ll hear a far less flattering narrative about the English political elites and the state of the British political system. Recalling Britain’s old democratic traditions is not working anymore. A champion of right-wing nationalism and populism, a politician refusing to be interviewed, lying, attempting to close down parliament, and making xenophobic comments, is running the show. But Johnson is only the tip of the iceberg.” 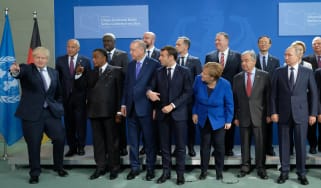