Pros and cons of privatising the NHS 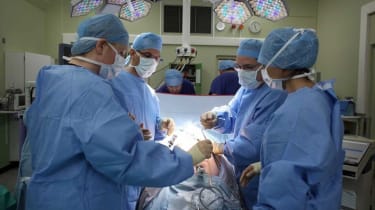 MPs have voted down an amendment to the government’s trade bill that was intended to protect the NHS from being included in any future deals.

No Conservative MPs voted in favour of the amendment, while all opposition parties supported the amendment which lost by 337 to 248 votes.

“Before the vote more than 400 doctors and health professionals had sent an open letter to ministers,” the British Medical Journal reports.

The open letter urged the government “to accept amendments to ensure that health services were not on the table in any post-Brexit trade deals”.

However, the rejection of any changes to the bill now means that the NHS will not be protected “from any form of control from outside the UK… call[ing] into question numerous assurances from Boris Johnson and other Conservative cabinet ministers that the NHS is ‘not for sale’”, Metro says.

Labour’s shadow international trade minister Bill Esterson said the vote leaves the health service “wide open to pharmaceutical giants”. However some Conservative MPs moved to play down such concerns, with Burnley’s Tory MP Anthony Higginbotham saying the party “will not put the NHS up for sale in a trade agreement”.

There's been quite a few posts on social media today about last night's vote on the Trade Bill and claims I voted to sell off the NHS. ❌ Those claims couldn't be further from the truth and this was just more Labour Party scaremongering. More info in the video below 👇 pic.twitter.com/IIHKEIhDed

Privatisation of the NHS is a fraught topic at any general election, and was high on the agenda in the battle between Boris Johnson and Jeremy Corbyn back in December. So what are the arguments for and against the idea?

Before his death, Professor Stephen Hawking warned that the government is taking the NHS “towards a US-style insurance system, run by... private companies”, and insisted: “We must prevent the establishment of a two-tier service.”

A long-term user of the NHS, having lived with motor neurone disease for more than 50 years, Hawking wrote in The Guardian that the NHS is “the fairest way to deliver healthcare”.

The moral argument for a public system which delivers free care to everybody, regardless of wealth or status, was once unassailable – and even advocates for increased privatisation still do not question the principle, at least in public.

Yet the service was set up “in the face of political opposition”, says Hawking. Public opinion may shift again – particularly when the argument is made that the service is simply too expensive to run now, given an aging population unforeseen by its founders.

That may seem a surprising claim, with the prevailing wisdom since the Thatcher years that state control is inherently inefficient and internal markets bring savings. But Hawking told the Royal Society of Medicine in August: “International comparisons indicate that the most efficient way to provide good healthcare is for services to be publicly funded and publicly run.”

One of those comparisons is a 2012 study by as US-Bosnian team, looking at healthcare systems in several countries, which concluded those that systems which “ration their care by government provision or government insurance incur lower per-capita costs”.

The US, with its privately run insurance-based system, spends more per person on health than any other nation, OECD figures show. Yet patients are more satisfied in countries with a government-controlled system such as Germany and Canada.

Private firms will not carry on providing an unprofitable service any longer than they have to. This could lead to a lack of continuity, with some patients finding their health providers change during an illness.

For this reason, writes The Guardian’s elderly patient columnist Dick Vinegar (not his real name), “any service, like GPs, where continuity is essential to the patient, should not go to private companies on short contracts”.

Continuity is particularly crucial for elderly patients, says Lara Sonola of the respected health think tank the King’s Fund. “Good continuity of care inspires trust and confidence,” she writes. Continuity can be as simple as staff knowing a patient’s name. The NHS is not a paragon of continuity – but few argue increased privatisation would improve it.

The US healthcare system “suffers from [this] bizarre phenomenon”, writes Elisabeth Rosenthal on CNN. Year on year, the cost of drugs and other treatments increase. Instead of getting cheaper as they become more widespread, new medicines, tests and procedures actually become more expensive. “When one hospital system manages to get away with charging extremely high prices, it provides cover for others to raise theirs,” says Rosenthal.

Other countries get around this by having charges for services set by government, even though providers are private. In Japan, an echocardiogram would cost less than $100, says Rosenthal. The same procedure might cost $1,714 in Massachusetts – or $5,435 in New Jersey.

“Commercial confidentiality makes it impossible to scrutinise public spending,” warns Unite in a report on the possibility of privatising the NHS – a possibility the union unsurprisingly strongly opposes.

Writing in Time magazine in 2013, Stephen Brill said that the cost of treatment in US hospitals is hard to assess because of a lack of transparency. And American patients – especially the poorest – are kept in the dark, with “no idea what their bills mean”. They are presented with a final figure and have no way of assessing if the charges are reasonable.

The NHS is often seen as a one-size-fits-all system by its detractors, while a privatised service might allow patients to better choose where to be treated – and what treatment to have. In fact, a substantial degree of patient choice has been introduced into the service over the past two decades, says The Guardian. Thomas Cawston of think tank Reform told the BBC that competition within the NHS maximises choice for patients and that more privatisation would therefore be a good thing.

But “provider choice has limited value”, says The Guardian. In rural parts of the country, most patients would only want to visit their nearest hospital – in fact it may be impossible for them to travel anywhere else.

What’s more, the experience from the US suggests that a fully private system gives choice only to well-off people. Brill warns that the 42 million Americans with no health insurance have “little choice of hospitals [and] no choice of the drugs that they have to buy or the lab tests or CT scans that they have to get”. He adds: “They are powerless buyers in a seller’s market where the only sure thing is the profit of the sellers.”

According to Max Pemberton, a doctor with 20 years’ experience writing in The Spectator, the NHS has become “a confused hotchpotch of short-term solutions imposed in a haphazard and uncoordinated way on an anachronistic model”. While he stops short of recommending privatisation, he says the current system is unsustainable.

“We need to think creatively about how we could fund the NHS,” he writes. “For example: if people are willing to pay for their healthcare, should they be allowed to do so? Should prescriptions be subsidised for those who can afford them, and should we charge for GP appointments like the Scandinavians do? Might the NHS offer a basic service, with health insurance required for the extras?”

In his report, Darzi suggests privatisation is neither the problem nor the solution. The vast majority of healthcare provision remains in the public sector, he said, and the issue “pales in comparison” to the funding and workforce crises.

“Focusing the debate on privatisation is damaging precisely because it distracts from the more pressing questions of funding, workforce retention, education and training, and the changes to both provision and commissioning that are needed to deliver consistently high quality care," he said.