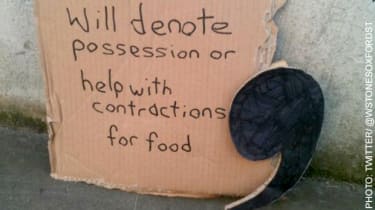 The days of the apostrophe may be numbered as the Apostrophe Protection Society announced it plans to close. The chairman John Richards, 96, said: “We, and our many supporters worldwide, have done our best but the ignorance and laziness present in modern times have won!”

A cinema in Washington was evacuated after a wayward package of urine was sent to the wrong address. The incident began when a box marked “highly contagious human substance” wrongly arrived at the North Bend Theater and began to leak. The manager was taken to hospital as a precaution but the cinema later announced: “All is well.”

A wedding ring lost by an Oregon woman on a skiing trip in 1992 has turned up 2,000 miles away. Melisse De La Mare, of Portland, said she lost the precious ring while skiing on Mount Bachelor in Bend, Ore. A jeweller who found the ring used clues to track down its owner and reunite it with her. The two women have now become friends.