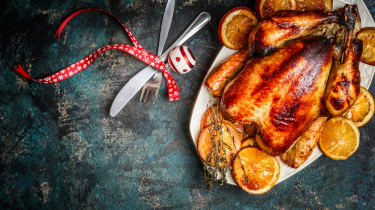 A year of controversy and division is ending with the contentious revelation that more than five million British people plan to serve up their Christmas dinner this year with mayonnaise. A survey found that 5.7 million people across the UK will be serving mayo with their big meal because they regard bread sauce and cranberry sauce as “old fashioned”.

YouTuber has testicle removed for Trump

A right-wing YouTuber says he has followed through on his promise to have a testicle removed if Donald Trump was impeached. Back in September, Joey “Salads” Saladino, tweeted: “If Trump gets impeached, I will donate my Left testicle to medical research.” After the US president was indeed impeached, the vlogger posted a photo of himself in what appears to be a hospital bed with the caption: “Man of my word.”

A man who was hospitalised with a bottle lodged up his anus says that he was trying to scratch an itch when the seven-inch bottle suddenly went right up him. When the unnamed 60-year-old arrived at hospital in China he told doctors: “My abdomen hurts. There’s something inside. I can’t poo or fart”.