A bookstore in Oregon has released a unisex fragrance that smells of books. With hints of violet, wood and biblichor, the $24.99 (£19) perfume at Powell's City of Books aims to replicate the smell of old paper that “creates an atmosphere ripe with mood and possibility, invoking a labyrinth of books; secret libraries; ancient scrolls; and cognac swilled by philosopher-kings”.

A brawl broke out in the Tesco eggs aisle during yesterday’s two-minute silence. “We were all stood still, observing the two minutes’ silence when we heard lots of screaming and shouting,” said an onlooker at the branch in Middlesbrough. “There were smashed eggs all over the floor. I only went in for a chicken.”

A fisherman in Florida broke a state record when he landed a non-native lionfish measuring 18.19 inches (46.2cm) long in the Gulf of Mexico. “I saw a monster lionfish and immediately knew I wanted to measure it,” said Donald Vautrinot. "I got really excited.” Lionfish are regarded as an invasive species in Florida and open season for the fish lasts all year long. 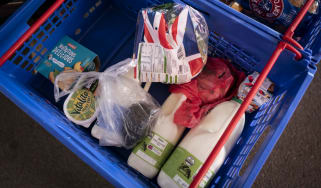