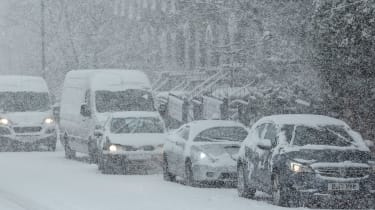 Terrified locals phoned the police during a rare thundersnow event in Edinburgh this week. The occurrence, which happens when thunder and lightning mix with a heavy snowstorm, caused so much noise that some locals thought there were bombs going off. One person said it sounded like “a sonic boom” and another said “it was very loud like an explosion”.

Man has coin removed from nose after 53 years

A Russian man has had a coin removed from his nose after more than half a century. The 59-year-old was six-years-old when he got the cash stuck in his right nostril. He was “too scared” to tell his mother and then forgot it had happened until he recently had trouble breathing. A surgeon said the man “regained full nasal breathing”.

A man in the US has recaptured a Guinness World Record by using a samurai sword to slice through 68 grapes while standing on a balance board. David Rush of Idaho, who previously set the record at 57 grapes, was helped by his neighbour Jonathan Hannon. Rush has broken more than 150 Guinness records to promote science, technology, engineering and maths education.