Like Blair before him, Cameron looks for glory and ducks big issues that require strategic thinking

No one knows what will happen to shipwrecked migrants in the Mediterranean after tomorrow, when the Italian Navy and Coastguards will cease their massive emergency rescue operation – Mare Nostrum (‘Our Sea’) - which has saved some 140,000 lives in just under a year.

From the weekend the EU is to mount instead a more modest patrol – codename Operation Triton - closer into the shores of Italy itself, the island of Lampedusa and Malta. It is, specifically, not a rescue mission.

The UK government, in David Cameron’s new spirit of neo-isolationism, has said it doesn’t back rescue missions in the Mediterranean. Reluctantly it is sending one ‘debriefing expert’ to join Triton.

The government’s scepticism about Mare Nostrum was expressed in stark terms by the new minister at the Foreign Office, Lady Anelay, this week.

“We do not support planned search and rescue operations in the Mediterranean,” she said, explaining that these generated “an unintended ‘pull factor’, encouraging more migrants to attempt the dangerous sea crossing and thereby leading to more tragic and unnecessary deaths”.

In short, the logic put forward by the UK government is that the more victims drown, and are seen to drown, the more migrants will be put off from making the crossing. This would indicate the diminishing assets of intelligence and wisdom in Whitehall today.

The problem of mass migration across the Mediterranean has been tracked and identified for nearly half a century and written about continuously by some of us.

The drivers are huge population expansions and shifts, some caused by climate change, others by pestilence, famine and conflict. Refugees from the sub-Sahara, Somalia, Syria, Yemen, Afghanistan and beyond are taking the hazardous boat journey across the Mediterranean.

It is now a major humanitarian emergency, a category that obliges members of the UN to act under the terms of the UN Charter.

But as we have seen in Syria, Iraq, Afghanistan, Mali and Libya, David Cameron’s team likes to pick and choose its humanitarian crises and “generational struggles” – a favourite Cameron expression – and when to act or not. The tap of humanitarian kindness is to be turned on and off at will.

On the Mediterranean crisis, Cameron and his team are swimming against the tide of humanitarian convention and law - also against the basic laws of the sea and navigation, which assume that the distressed, shipwrecked and drowning should be saved.

Humanitarian intervention of the kind advocated by Tony Blair in his Chicago speech in the middle of the Kosovo crisis in April 1999 is now off the agenda. It worked in Kosovo, but didn’t so much in Afghanistan, and fared even worse in the invasion and occupation of Iraq in 2003.

Instead, the UN has embraced the notion of a major humanitarian emergency requiring humanitarian action. This is linked to the concept of the responsibility to protect (R2P for short), adopted by the UN as a convention, though not a binding obligation under current international law. It is, however, moving towards becoming a key tenet of international law under the UN Charter of Human Rights.

Over the past two years, Cameron has been moved by the humanitarian emergency of the millions of refugees from the conflict in Syria and the plight of the people of Benghazi, Libya’s second city, in 2011. Yet he is prepared to ignore the migrants drowning in the Mediterranean.

Here he seems to be borrowing from the policies of Tony Abbott’s government in Australia. Since the beginning of the year, Australian security forces have been turning round refugee ‘boat people’ in their leaky vessels before they can land. So far it has caused no serious outcry among Australians.

Back to Lady Anelay. “The government believes the most effective way to prevent refugees and migrants attempting this dangerous crossing is to focus our attention on countries of origin and transit, as well as taking steps to fight the people smugglers who willfully put lives at risk by packing migrants into unseaworthy boats,” she told the House of Lords.

Yet in the past year only one human trafficker has been charged by the Italian authorities. And Britain’s record in helping “countries of origin and transit” doesn’t look too good in the case of Afghanistan, where the narco-economy grew in Helmand on the British Army’s watch.

Furthermore, the recent chaos and anarchy in Libya, the prime "country of transit" for Mediterranean migration today, was caused in large part by the precipitous action led by Britain and France in 2011. This saw the replacement of the dictator Colonel Gaddafi by something equally ghastly, if not worse.

The Cameron team’s inability to think and act strategically is a trait picked up from Tony Blair, from whom Cameron took counsel over Libya.

This is brought out in a brilliant little book by Jonathan Shaw, Britain in a Perilous World, a must-read for any British politician or political journalist.

Shaw, who served in the British Army at the heart of government in Whitehall as Director of Special Forces, as well as commander in the field in Basra, observes that Cameron and Blair both want to be seen to be taking action first at all costs – to be ahead of the pack and reap the glory, as with Blair after 9/11 and Cameron over Libya.

Cameron was told by Blair to lead the charge against Gaddafi as his troops approached Benghazi – or the French would get in first. Cameron was advised by his chief military adviser, General David Richards, that he needed a strategy – meaning he needed to work out what the second and third level of consequences would be of military action. Cameron ignored him.

This was the weakness in the PM's speech last August to persuade Parliament, and the country, that British forces should attack the Assad regime over chemical weapons.

Neither Cameron nor his ministers gave any impression that they understood what the fall-out - the strategic consequences - would be. In that case it would almost certainly have been all-out war, with the US and UK unconsciously abetting the aims of al-Qaeda and the Islamic State.

The same is happening again over the Mediterranean, an area of vital interest not only to crucial British allies, but to Britain itself – because determined migrants get here in the end. Sounding tough about dying Mediterranean refugees - 'Let them drown' - seems to be another attempt to trump the isolationist, anti-immigrant ace of Nigel Farage and Ukip. But again it’s all tactics and no strategy.

Once again it has shown Cameron’s Britain as the semi-detached member of the EU, and as a weak and self-absorbed ally. Strategically – that is to say, two steps down the line – this points to an exit from the European Union, and very likely Britain being stripped of permanent membership of the UN Security Council.

The movement of people across the Mediterranean is an enduring, strategic issue for the European neighbourhood. The notion of drawing up a metaphorical drawbridge over the English Channel, though beguiling, should be put where it belongs – in the library of political science fiction.

What is David Cameron doing now? 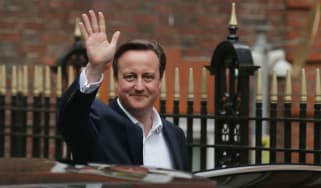 What is David Cameron doing now?