‘A lot of things to fix’: Arsenal finally win but Freddie Ljungberg has work to do

Was it a win that simply papered over the gaping cracks in the Gunners squad, or the start of an Arsenal renaissance?

The answer to that question will be revealed on Sunday when Manchester City travel to the Emirates Stadium.

Arsenal’s 3-1 victory at the London Stadium on Monday night, their first in the Premier League for two months, sprang from an extraordinary nine minutes midway through the second half when they scored three goals.

It was the first time in eight years that Arsenal have won a Premier League match on the road from a losing position at half-time.

They could even have had a couple more in the final quarter as they overran the West Ham defence but in the end had to settle for the strikes from Gabriel Martinelli, Nicolas Pepe and Pierre-Emerick Aubameyang.

They were all goals of quality, light years away from the dross served up by both sides in the opening 45 minutes. It was football that would have shamed the non-league, let alone the Premier League as two clubs stripped of confidence tip-toed cautiously across the pitch.

The boring deadlock was eventually broken by Angelo Ogbonna’s deflected header for the Hammers on 38 minutes, a suitably scrappy goal for such a poor game, and the boos at half time came from the travelling fans.

In fairness to Arsenal their plans had been disrupted before kick-off when Hector Bellerin tweaked a hamstring during the warm-up, and the nasty shoulder injury to Kieran Tierney on 29 minutes meant the Gunners had lost both full-backs before the break.

That was no excuse for the tired and insipid football of the first-half, all the more surprising given that caretaker manager Freddie Ljungberg had made five changes from the side that capitulated to Brighton last Thursday, including a first Premier League start for 18-year-old striker Martinelli.

Here's how the #PL table looksCan anybody catch Liverpool? 🤔 pic.twitter.com/PIABunV9im

The Brazilian has scored seven goals in his cup appearances this season and he made it eight on the hour mark with a crisply-struck shot.

Six minutes later Pepe - finally giving a glimpse of why Arsenal paid Lille £72m for him last summer - curled in a stunner and then Aubameyang crashed a volley into the net to leave the Hammers a point above the relegation zone.

So Arsenal - who move into ninth - ended a nine-game streak without a win and their fans travelled back across London in good voice.

Whether they’ll be singing on Sunday evening once Pep Guardiola’s Man City have visited the Emirates remains to be seen. 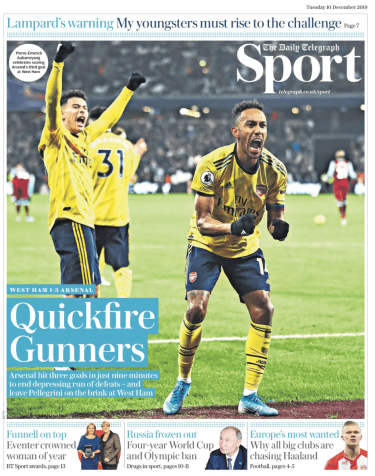 “To win is a great feeling and it’s a lot better to win than lose. This is a club I love. We have a lot to work on. The players have been under a lot of pressure but had the mental strength to win. We are not near to where I want us to be. There are a lot of things to fix.”

“This was Arsenal’s first league win since 6 October but surely not a victory to start a clamour for the appointment of Freddie Ljungberg. The north London club are in disarray and their defending at the London Stadium was unimpressive, verging on the slapstick.”

“Arsenal will not face opponents as generous as West Ham every week. Manuel Pellegrini’s struggling side, a point above the bottom three, were atrocious after the break.”

“Gloating Gooners should not read too much into this result. Because their team are still drifting aimlessly in mid-table between and miles off the top four. So if the Emirates executives actually have a plan, they really need to think about putting it into operation.”