by The Week team
Donny van de Beek celebrates scoring a goal for Ajax in the Champions League&nbsp;

There’s a “transfer twist” in the tussle to sign Donny van de Beek with reports that Manchester United are set for a “battle” with Real Madrid.

The two clubs have both been linked to the Ajax star in recent months and the Daily Express claims that United are “keen” on landing the midfield maestro.

United manager Ole Gunnar Solskjaer is apparently still in the hunt for solid midfielders in the January transfer window having failed to bring in adequate replacements for Marouane Fellaini and Ander Herrera.

Van de Beek has scored five goals and provided four assists this season for Ajax and as a result United are poised to table a big bid next month.

But the Express says Real Madrid are also circling and they are determined to hijack United’s bid in revenge for failing to prise Paul Pogba from Old Trafford in the summer.

Man Utd are also facing stiff competition for the hand of Ivan Rakitic with the Daily Mirror reporting that Juventus have “opened talks with Barcelona” over the Croatian midfielder.

Apparently Juve’s sporting director Fabio Paratici is hoping to sweet talk the Spanish giants into agreeing on a swap deal.

Rakitic has been on the fringes of the Barca first team this season and the Spanish press report that he’s looking for regular time next year.

Juve and United are both ready to offer the playmaker exactly that, but the Italian champions have “made the first move” to land the 31-year-old.

It’s believed that Barcelona have been offered defenders Daniele Rugani and Merih Demiral but the Express says the Catalan club have their eye on winger Federico Bernardeschi.

Paratici has held meetings with Barca chiefs in recent weeks but it’s said he is reluctant to wave goodbye to Bernardeschi, and that offers United a glimmer of hope.

Man Utd have what the Daily Express describes as a “strong interest” in Bruno Fernandes and a January bid is in the pipeline.

The Red Devils have long been linked with the Sporting Lisbon star but they will have to beat off competition from Atletico Madrid if they’re to secure the hand of the Portugal international.

Solskjaer is a fan of the 25-year-old Fernandes and Portuguese newspaper O Jogo say that United are “pushing hard to sign the midfielder”.

It’s believed that Van de Beek is Solskjaer’s Plan A next month, but if he does lose out to Real Madrid he will turn his attention to Fernandes, who has scored 12 goals and clocked up ten assists this season.

‘No excuses’ for Jurgen Klopp’s Liverpool 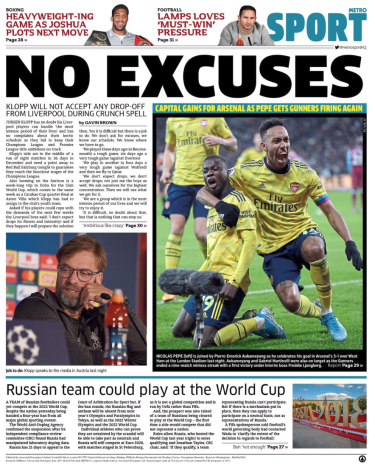