Old Trafford board are ready to stand by their manager

Rumours of Ole Gunnar Solskjaer’s imminent departure at Old Trafford are wide of the mark, says The Sun, with the paper claiming that the Manchester United board are ready to stand by their man.

Ever since Mauricio Pochettino was sacked by Tottenham last month, there has been fevered speculation in the media that he would head north to take charge of the Red Devils.

Not true, claims the Sun, which says that the chances of Pochettino becoming United’s new manager are “diminishing by the day”.

Perhaps the speculation helped focus Solskjaer and his squad because in the weeks since Pochettino has been without gainful employment, United have found their mojo.

They have beat Tottenham and Manchester City to move up to fifth in the Premier League table, and have also qualified for the last 32 of the Europa League as group winners.

As a result the Old Trafford board are “delighted” with the way the side are now performing and they trust the Norwegian to turn the club once more into a powerhouse.

Despite calls for Solksjaer’s sacking this year, the board “see a long-term strategy” emerging which explains why they have resisted the pressure from the public and press to wield the axe.

It was rumoured recently that officials were planning showdown talks with Solskjaer but according to the Sun “there has been no meetings between the manager and the board” and unlikely to be any in the foreseeable future given the way United are playing.

Nonetheless, Solskjaer knows that finishing fourth in the Premier League and qualifying for next season’s Champions League is a “minimum requirement”, and should he fail to meet that challenge he can expect to be fired.

Dortmund or the Hammers?

If Solskjaer is sacked at the end of the season it’s unlikely that Pochettino would still be available with Borussia Dortmund the latest club to be linked to the ex-Spurs boss.

According to The Daily Telegraph, the South American finds the interest from the German club “tempting” because it will mean a quick return to Champions League football, not a prospect he’s likely to have should he be appointed manager of either Everton or Arsenal.

On the other hand, the Daily Star says that West Ham are eyeing up Pochettino as they prepare to jettison Manuel Pellegrini.

While the Hammers won’t be playing in the Champions League anytime soon, a move to the London Stadium would mean that Pochettino wouldn’t have to uproot his family from the capital.

Pep out, Poch in at Man City?

The Daily Mail also reports that Pep Guardiola has a “secret release clause” in his contract at Manchester City. An agreement in his deal at the Etihad means the Spaniard could leave the Premier League champions at the end of the season.

Guardiola signed a new contract last year, which extended his original deal until 2021, and the Mail says it includes “an agreement that he could depart at the conclusion of this campaign should certain stipulations that satisfy the club be met”.

City’s board are confident that Guardiola will honour his deal, but it’s also claimed they “remain admirers” of Pochettino. 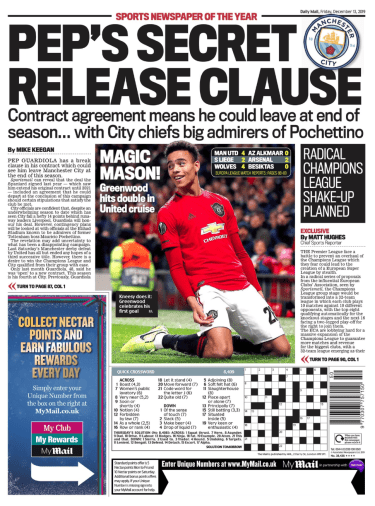