‘We appeal’: Pep Guardiola and Man City go on the attack over Champions League ban

Manchester City displayed defiance on and off the pitch last night as they beat West Ham 2-0 in their first match since being slapped with a two-season Champions League ban by Uefa.

Goals from Rodri and Kevin De Bruyne eased the Sky Blues to a comfortable Premier League win against the Hammers, a victory that moves City into second spot above Leicester.

The performance heartened the City faithful who made their feelings at the ban clear throughout the game with a series of anti-Uefa chants along with several banners displaying such messages as “Uefa cartel” and “Uefa mafia”.

Their resolve was matched by their manager’s when Pep Guardiola addressed the BBC in his post-match press conference.

“We appeal,” he said, referring to the club’s intention to contest the ban at the Court of Arbitration for Sport (Cas). “When someone believes they are right they have to fight.”

All to play for

Guardiola said his players’ performance against West Ham had come as no surprise given the professionalism of his squad, adding that they had discussed the importance of focusing on their job despite the furore surrounding the ban.

“What happens off it we cannot do much [about it],” explained the Spaniard. “We talked about what we have to do until the end of the season, especially for the people who love this club. We will play our game the best as possible. We have a lot of interesting things to play for.”

When he was asked about his future, Guardiola replied: “If they don’t sack me I will be here. I love this club. I like to be here. This is my club and I will be here, no matter.

“The club has to fight and I trust the club 100% [in] what they have done, and they have explained to me.”

Guardiola also had a few choice words for former club Barcelona, whose president, Josep Maria Bartomeu, has endorsed Uefa’s decision to ban City and hit them with a £25m fine for overstating its sponsorship revenue in its accounts.

“If they are happy we are suspended, I say to the president of Barcelona, give us two appeals,” said Guardiola.

“I ask right now the people trust what they have done. Don’t talk too loud Barcelona. That is my advice, because everybody is involved in situations. We are going to appeal and hopefully in the future we can play Champions League against Barcelona.”

Guardiola’s comments suggest that he is unlikely to accept Bartomeu’s invitation to return to Barcelona where “the door is always open for him”. 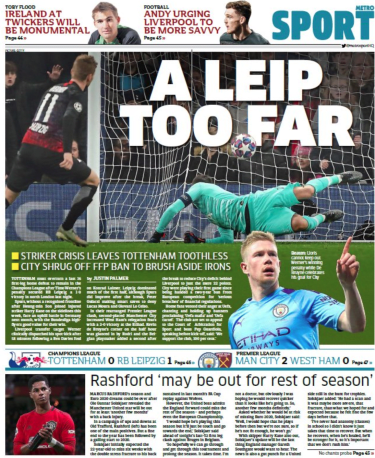