Arsenal players reject 12.5% pay cut - could Aubameyang now be off?

Financial situation may force the Gunners to sell their biggest names

Arsenal’s senior players have rejected the terms of a 12.5% pay cut over 12 months in response to the coronavirus crisis.

The Daily Telegraph reports that the Gunners have spent recent weeks drafting a deal in which the squad was asked to take a 12.5% drop in wages with the money being reimbursed if they are sold in the next year or if they extended their current contract.

The deal was put to a vote yesterday afternoon and according to the Telegraph “none among the more senior professionals on the top-earning contracts voted in favour”.

Some of the younger players did give the deal their seal of approval but Arsenal did not get the three-quarter majority required for the proposal to be implemented.

Apparently the realisation that the transfer market is expected to be very sluggish this summer - with players and their agents no longer able to call the shots - was an influencing factor on those players who voted no.

The fact that Arsenal are currently ninth in the Premier League table may also have made the squad reluctant to vote in favour of the deal.

The 12.5% cut would have represented a saving for Arsenal of around £25m which, says the Telegraph, would be a “welcome economy for a club with a £230m annual wage bill”.

The Athletic claims that Arsenal have also asked their players to “donate a week’s wages to help cover the salaries of lower-paid staff to protect all jobs at the club during the coronavirus crisis”.

Whether they will agree to this isn’t yet known but it’s expected they will seek guidance from the Professional Footballers’ Association (PFA).

The Sun claims that the rejection of the deal leaves Arsenal in a financially precarious situation and they could be forced to offload some of their biggest names this summer as a result.

Among those who could be ditched include Mesut Ozil, although finding a club for someone on his £350,000-a-week salary is a challenge. Meanwhile, the Sun says captain Pierre-Emerick Aubameyang is believed to be a £44m target for Real Madrid. 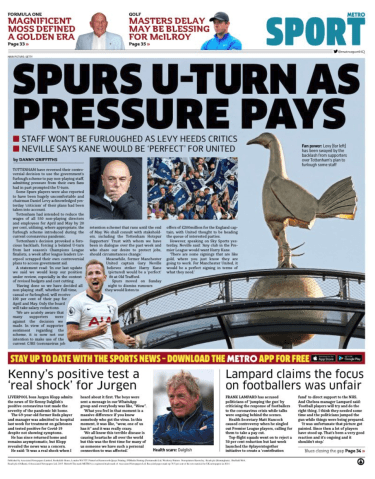