by The Week team
Ed Woodward is the executive vice-chairman of Manchester United&nbsp;

On the day that Italy’s sports minister declared it was “unlikely” Serie A would restart any time soon, Manchester United executive vice-chairman Ed Woodward queried whether this season’s Premier League will be completed.

Woodward will tune into a video conference call tomorrow as Premier League clubs discuss the possibility of resuming matches behind closed doors on 8 June, but he has admitted his doubt whether it’s feasible the 2019-20 season can be finished given that Britain is still in the throes of the coronavirus crisis.

“From a UK perspective there is still huge uncertainty so we will keep fans informed as soon as decisions are made,” said Woodward.

These questions will be pondered at tomorrow’s meeting but Woodward, who gave his interview in a fans’ forum conference call prior to France’s announcement that their season is terminated, will surely look closely at the decision to close down Ligue 1.

Serie A season in doubt

The French decision appears to have prompted a change of heart in the Italian government.

Last weekend Italy’s Prime Minister Giuseppe Conte announced that professional sports can resume training on 18 May. That led to fevered speculation among fans that Serie A matches would restart in June, but on Wednesday sports minister Vincenzo Spadafora said he was sceptical that football would return in the summer.

“I understand some people saying that, but that leaves us with uncertainty. If we don’t want uncertainty then we need to follow other countries which have already shut down everything.

“Honestly, I see the path to restarting Serie A getting ever narrower. Resuming training is an important sign but if I was among the presidents of the soccer teams I would be thinking about next season.”

Serie A’s governing body meets this week to discuss the situation but Spadafora said he wouldn’t be surprised if they decide to abandon the 2019-20 season.

“I think there could be a majority of presidents ready to ask for the season to be ended so they can best prepare for next season,” he said.

German football will learn later today whether it can plan for a restart next month with concern growing that Chancellor Angela Merkel will also be influenced by the French announcement and also the word of Lars-Christer Olsson, president of European Leagues and a member of Uefa’s executive committee.

In an interview with the BBC, Olsson said he would “rather see a scenario where the current season is not finished than not kicking off the new season”.

It had been expected that the Bundesliga would restart on 9 May, but that date is now in doubt after a slight increase in coronavirus cases.

Merkel will host a meeting of leaders of German states today and the return of football will be high on the agenda. 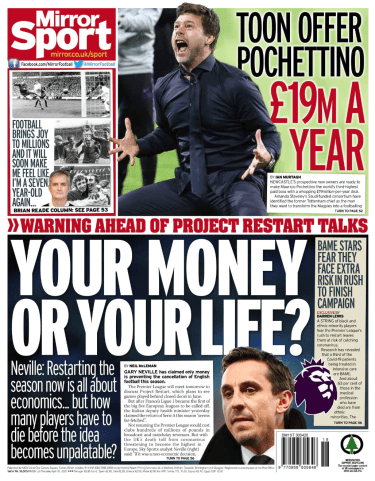