The paper claims that the Premier League champions will swoop for PSG sensation Kylian Mbappe if the French club have to sell him to fall in line with Uefa’s financial fair play (FFP) rules.

Apparently PSG are under investigation by European football’s top brass “after paying Barcelona £198m for Brazilian superstar Neymar last summer and then tying up a loan deal with Monaco for Mbappe”.

The fine print of that latter deal means that PSG will have to pay their French rivals £167m for Mbappe this summer, and that could see them break the FFP rules. If that’s the case, says the Mirror, “they face being booted out of the Champions League, as well as being hit with huge fines”.

In order to settle the fines they would be forced to sell some of their star assets and that could result in the 19-year-old Mbappe being offloaded to City. The Mirror says that Pep Guardiola is “monitoring the potential consequences” should PSG find themselves in the financial doghouse with Uefa.

It’s believed Guardiola tried to lure Mbappe to the Etihad last summer only to lose out to PSG but he remains keen on the teenage sensation.

However, the Mirror adds that the City gaffer is also circling Eden Hazard with a view to making a bid for the Belgian’s services this summer, and he’s “willing to pay £150m”.

Back pages: Bayern cause a ‘power Serge’ at Stamford Bridge 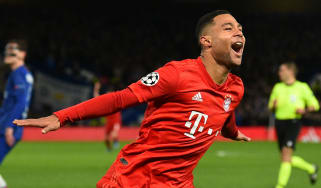 Back pages: Bayern cause a ‘power Serge’ at Stamford Bridge