Eddie Jones in ‘racism’ row as rugby is overshadowed once more

There was a time when the Six Nations was only about what happened on the pitch but increasingly now the coaches are the ones creating headlines.

England’s Eddie Jones is rarely off the back pages, what with his penchant for putting his foot in it (be it winding up the French or winding up the Scots), and the Aussie was at it again yesterday with an ill-judged quip to reporters.

Asked about his reputed meditation practices (admittedly an irrelevant question on the eve of England’s clash with Ireland), Jones flippantly replied: “I don’t think I’ve ever spoken about meditation. You must be thinking about someone else. Maybe another half-Asian person.”

Then, with a smile, the half-Japanese Jones, said: “Maybe we all look the same.”

It was a crass quip and one that was seized on by journalists looking for headlines.

“England coach drops a clanger” declared The Guardian on its back page, while the Daily Mirror, The Times and The Daily Telegraph also pointed an accusing finger at the Australian.

The latter said he had “sparked a racism row”, which is a little far-fetched given that Jones subsequently sought out the reporter to whom he had made the comment and apologised, an apology which was accepted.

The Rugby Football Union attempted to draw a line under the incident with a statement that said: “Eddie made an off-the-cuff comment during the press conference which was not intended to cause any offence.” 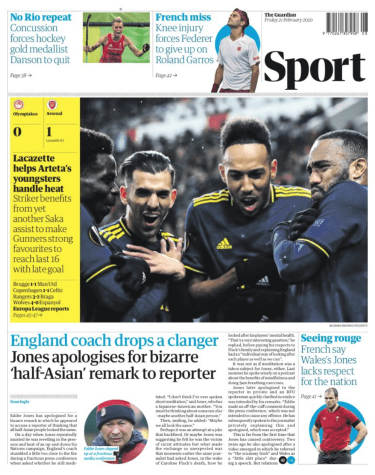 But Jones should have known better in this era of professional offence-taking, which has evidently spread across the channel to France.

Les Bleus play Wales tomorrow and it promises to be a feisty affair after the French reacted badly to suggestions earlier in the week by Wales that they were prone to cheating in the scrum.

“It’s a lack of respect towards our scrum, towards our team, towards French rugby, towards our nation,” fumed coach Fabian Galthie, perhaps forgetting that when the two sides met in the quarter-final of last year’s World Cup a Frenchman was sent off for elbowing a Welshman in the face.

Ibanez then ceded the moral high ground with a childish attack of his own, accusing Wales of selecting Dan Biggar despite concerns over his recent head injuries.

He said: “We could also question the fate of their fly-half who has been knocked out several times but has been going through the concussion protocol managed by the Welsh federation.”

It’s all becoming increasingly tiresome, reminiscent of the bad old days of the Premier League when Alex Ferguson, Jose Mourinho and Arsene Wenger couldn’t stop bad-mouthing each other on the back pages.

Ironically, on the same day as these latest spats, former Ireland and Ulster lock Dan Tuohy announced his retirement with a blistering broadside at what the sport has become.

“It’s starting to look like it’s rotten from the core,” he said in a social media post. “Integrity and loyalty is a thing of the past, even a simple gesture of looking someone in the eye has gone.”

Rugby’s not that far gone but it’s a sport that needs to clean up its act and coaches should set an example and shut up.

England head coach Jones has named his team to face Ireland at Twickenham on Sunday.

An injury to George Furbank means that Elliot Daly moves to full-back and Jonathan Joseph starts on the wing. Ben Youngs is selected at scrum-half.

Manu Tuilagi returns at centre, Joe Marler is at prop in place of Mako Vunipola and Courtney Lawes is on the flank. 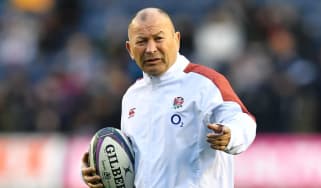 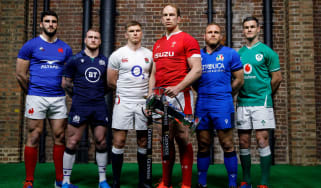