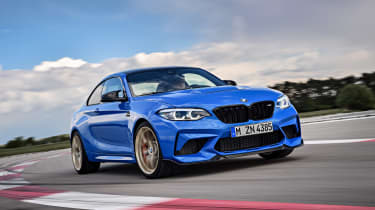 BMW has confirmed that it is seeing off its M2 performance coupe in style with a new, hardcore CS edition.

The 2 Series-based M2, which originally launched back in 2015, has been equipped with an M3-derived straight-six engine and a host of performance upgrades in limited edition CS form, which should make it one of the most driver-focused cars in the company’s arsenal.

A CS version of the M2 has long been rumoured, with images of camouflage-wrapped prototypes lapping the Nurburgring track in Germany circulating on the web for over a year.

US-based motoring site Jalopnik then posted images and specs of the performance car yesterday, with most sources claiming that the details were posted ahead of the company’s release schedule.

While some information emerged ahead of the car’s official unveiling, BMW has now revealed even more details about its hardcore M2.

With the CS due to make its public debut at the Los Angeles Auto Show, running from 22 November to 1 December, here’s everything we know about the M2’s swansong:

At £75,320, the M2 CS is around £24,000 more expensive than the previous range-topping 2 Series - the M2 Competition. It’s also matches the critically-acclaimed Porsche Cayman GT4 on price.

Only 2,200 examples of the M2 CS will be made and there’s no word yet on how many will come to the UK, says CarBuyer.

Orders are expected to open later this week and deliveries are due to commence next April, notes Autocar.

What sets the M2 CS apart from the sporty Competition model is “a number of exterior upgrades”, which include a carbon fibre roof and a “carbon fibre-reinforced plastic bonnet” with a thin row of vents in the centre, says Autocar. The bonnet is about half the weight of the steel version found on the M2 Competition.

Other changes include “a new splitter element” on the front bumper, a boot spoiler that’s bespoke to the M2 CS and a “multi-channel diffuser”, the motoring magazine says. These are all made of carbon fibre, reducing weight while adding downforce.

On the inside, the M2 CS gets a pair of bucket seats lined with a mix of leather and Alcantara with contrasting red stitching. The steering wheel is also wrapped in Alcantara, as is the centre console.

The exterior’s carbon fibre highlights extend to the interior, too. Auto Express notes that the centre console is made of carbon fibre, which is 50% lighter than the unit in the regular M2.

BMW’s iDrive infotainment system also features, though the company has opted for an analogue dashboard as opposed to a newer digital version. 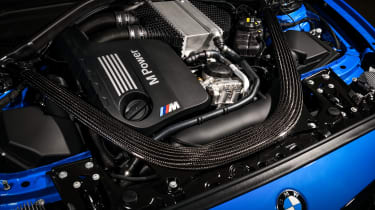 BMW has swapped out the regular M2’s twin-turbocharged six-cylinder engine for its S55-generation motor. This engine, also found in the M2 Competition, is identical to the twin-turbo 3.0-litre inline-six that powers the four-door M3 and two-door M4.

According to Jalopnik, the M2 CS’s engine produces 444bhp and 406lb-ft of torque, a jump of around 40bhp over the M2 Competition and matching the current M3 and M4.

Coupled to the motor is a seven-speed dual-clutch gearbox, sending power to the rear axle and helping the sports coupe sprint from 0-60mph in 3.8 seconds, the motoring site says. 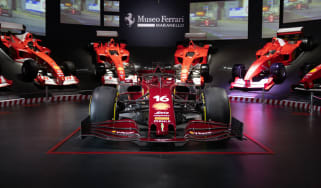 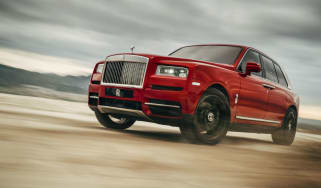 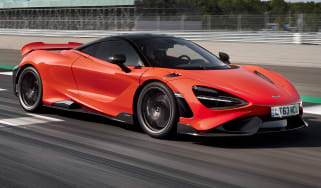