Golf gets innovative: how technology drives the European Tour

From connected courses and capturing data to crowd analytics and pace of play, the sport is looking to the future

by The Week team
A view of the 18th green during the 2019 BMW PGA Championship at Wentworth&nbsp;&nbsp;

Golf used to be called an old man’s sport - and for good reason.

Most clubs around the world had a men-only membership, with ageing players slowly making their way around 18 holes wearing flat caps, Argyle sweaters and plaid-pattern trousers.

Luckily, that’s in the past. The modern-day golfer - think Rory McIlroy, Brooks Koepka or Dustin Johnson - are putting the old boys to shame when it comes to training and preparation.

Gone are the days when time was only spent on the driving range, putting green and in the clubhouse bar. These days, golf’s elite are fitness enthusiasts who hire nutritionists, hypnotherapists and even sleep experts to help their performance on the fairways.

The top level also regularly use technology - such as motion capture cameras and wearable devices - in order to improve their swing, body movement and shot choice.

Professional golfers need to find that extra something if they are to contend for majors and tournament victories, so the use of tech is almost a certainty in this digital age.

It’s not just the professional golfers who are embracing technology to produce better standards on and off the field of play, but also the PGA European Tour itself.

As the operators of three pro golf tours - the main Tour, European Senior Tour and Challenge Tour - the Wentworth-based organisation has put technological and digital upgrades at the core of its business.

The main European Tour has 48 tournaments in 31 countries on its annual schedule. Each four-day event starts with a field of around 156 golfers, playing 18 holes, situated on courses which are between 200 and 300 acres in size.

When you also factor in that the events are shown live via broadcast partners and the host venues require the building of temporary facilities to house thousands of spectators, it’s clear why tech is so important to the European Tour’s future.

There’s also the small matter of instant scoring (on-course and digitally) and live coverage via social media and online. 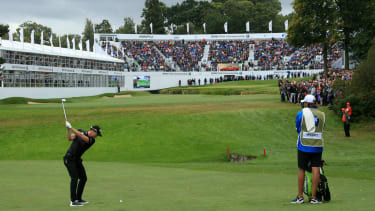 From 19-22 September the Wentworth Club in Surrey hosted the BMW PGA Championship, the flagship event on the European Tour’s schedule.

One of the eight Rolex Series tournaments, which each have a prize purse of $7m (£5.6m), the BMW PGA Championship was won by England’s Danny Willett who beat Spain’s Jon Rahm by three strokes.

The championship was the perfect setting for the launch of the European Tour’s Innovation Hub in partnership with Tata Communications.

The Innovation Hub is a new competition for start-ups to turn their golf technology concepts into reality with help from the European Tour and Tata Communications, the digital infrastructure services provider headquartered out of Mumbai, India.

The aim is to discover a tech start-up which can develop creative new solutions and concepts to enhance the game of golf.

On the sidelines at Wentworth, the European Tour’s chief technology officer, Michael Cole, told The Week about how the organisation is upgrading its technology to create “connected courses” and improve sporting aspects such as on-course pace of play and live scoring.

He says the key goal is to improve the overall golf experience for the Tour players, fans and the stakeholders at each tournament.

“If there was a sport that was timely for innovation, it’s golf,” said Cole. “I would strongly suggest that what we’re creating here is unique.

“When you think about golf, you think about our schedule - 48 tournaments in 31 countries, our close season is three days a year, we’re dealing with a course of 200-300 acres. Ninety per cent of our tournaments are held on green-field sites, everything we do is temporary overlay.

“We have not one field of play, we have 18 fields of play. We don’t have two teams, we typically have 156 players over four days, with a cut, it is technically complicated.

“That has to be the perfect platform for innovation.”

When we asked Cole about technology at the Tour, he added: “It’s just the tip of the iceberg. Our vision is a three-stage approach, initially to create the connected course.

“Next stage is to create the intelligent layer: crowd analytics, pace of play, data collections. The third element is how we then replicate that across all our tournaments - 48 tournaments in 31 countries. That is the hardest challenge.”

The Innovation Hub is one of the European Tour’s latest initiatives to take the sport of golf to the next level.

Ideas from start-ups could include tech concepts to enhance the on-course experience or bring golf fans closer to the action.

Cole said: “Whilst I have ideas, there are many others out there. I would rather raise the question to the industry: come and help us.”

With extensive experience in Formula 1 and MotoGP, Tata Communications also works with the European Tour to connect tournaments with broadcasters across the world. Throughout a single year half a billion golf fans across five continents are able to watch the action from a Tour event.

“There is so much technology coming in and competition for viewers is very high. You are competing with so many different sports. So how do you then bring in technology which can enable your experience?

“We want to encourage communities to think about how they can help transform the sport. We want to give them a structured framework and platform to be able to do that.”

Registration for the European Tour Innovation Hub with Tata Communications is now open. Entry details and judging criteria can be found at tatacommunications.com/innovationhub. A shortlist of three start-ups will be announced in November.