Ten things from the world of sport on Monday 7 October

by The Week team
The Fukuoka Hakatanomori Stadium will host the Ireland vs. Samoa pool A match on 12 October

The BBC reports that Rugby World Cup fixtures and the Formula 1 Japanese Grand Prix could be affected by Typhoon Hagibis, which is expected to bring disruption to southern Japan.

World Rugby and Formula 1 bosses are monitoring the typhoon which could reach a highest level of “violent”, Japan’s Meteorological Agency (JMA) has said. “It could be the strongest to hit Japan this year,” the JMA added.

On Saturday at the Rugby World Cup Ireland face Samoa in Fukuoka and on Sunday Wales play Uruguay in Kumamoto.

The F1 Japanese Grand Prix is taking place at Suzuka, with practice on Friday, qualifying on Saturday and the race on Sunday.

Typhoon #Hagibis formed in the northwest Pacific over the weekend and is already classed as a violent Typhoon. It is forecast to move towards #Japan during this week... pic.twitter.com/cKv2lLqucJ

Chris Silverwood has been named head coach of the England men’s cricket team.

The 44-year-old is promoted from the role of bowling coach and replaces Trevor Bayliss, who left the post at the end of the season.

Silverwood said: “I aim to continue the great work that has been done over the past five years and build on our future, especially in the Test arena.

“I have enjoyed working with the players over the past two seasons, and developing the best crop of talent in the English game.”

He will be in charge for England’s tour of New Zealand where the team will play five international Twenty20 matches and two Tests.

Why everyone’s talking about The Hundred

Spanish rider Marc Marquez is a six-time MotoGP world champion after his victory at the Thailand MotoGP yesterday.

The 26-year-old, who has won the title four times in a row, said: “I was planning the weekend to win the race and not think about the championship. My target was to find the best way to win the race, and that’s what I did. Amazing year. All the team did an amazing job. Now it’s time to enjoy and celebrate the title.”

Golf gets innovative: how technology drives the European Tour

5. Nike Oregon Project ‘has to go’

A key whistle-blower says that the Nike Oregon Project (NOP) should be shut down permanently following Alberto Salazar’s four-year suspension for doping violations.

American Kara Goucher told the BBC: “It [NOP] has to go. If I was Nike I’d be bringing in some new coaches and move on from this Oregon Project, because clearly it had principles not in line with clean sport and we have to just start over.”

The 2019 NFL London Games kicked off yesterday with the Oakland Raiders beating the Chicago Bears 24-21 in the first ever American football match held at the Tottenham Hotspur Stadium.

NFL returns to the Spurs stadium next Sunday when the Carolina Panthers play the Tampa Bay Buccaneers in north London.

The dates for the 2020 Formula 1 race calendar and pre-season tests have been confirmed following a meeting of the FIA World Motor Sport Council in Germany.

Pre-season testing begins with two sessions in Barcelona - 19-21 and 26-28 February - and the first race of the 2020 F1 campaign will be held in Melbourne, Australia on Sunday 15 March.

Novak Djokovic is looking to end his season on a high after returning from injury to win the Japan Open.

World No.1 Djokovic beat John Millman 6-3, 6-2 in Tokyo to secure a fourth title of the year and the 76th of his career.

The Serbian said in Japan: “It was a fantastic week in every sense. I felt great on the court, felt very welcomed by the Japanese people, off the court as well. They made me feel like at home. Didn’t drop a set, played really well, served great. Just overall, a great experience.”

Speaking ahead of the Shanghai Masters, he added: “I am hoping I can finish the season in this style.”

Djokovic vs. Nadal vs. Federer: who will end their career as the ‘GOAT’?

England became the first country to reach the Rugby World Cup quarter-finals after beating Argentina on Saturday to make it three wins from three games in pool C.

The Pumas were reduced to 14 men midway through the first-half when second-row Tomas Lavanini was rightly red-carded for a high hit on Owen Farrell, and England took full advantage to canter to a 39-10 victory.

RWC diary: England qualify but what about the other home nations?

It was a terrible Sunday for fans of Premier League rivals Manchester City and Manchester United.

City were shocked 2-0 at home against Wolves at the Etihad Stadium and the defeat means the defending champions are now eight points behind league leaders Liverpool.

United, who were beaten 1-0 at Newcastle, are experiencing their worst start to a season for 30 years.

Man Utd in turmoil: it’s Liverpool up next after the international break

Today’s back pages: Manchester misery for City and United 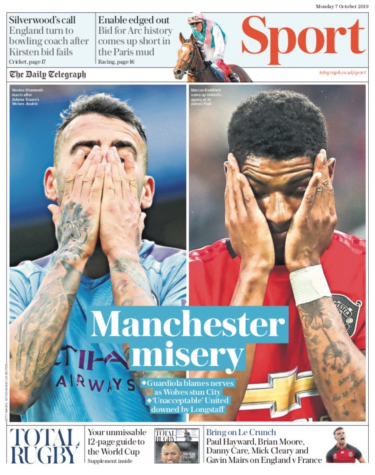