Ten things from the world of sport on Thursday 21 November

Anthony Joshua is confident of beating Andy Ruiz Jr in next month’s heavyweight title rematch and reclaim the belts he lost earlier this year.

Ruiz Jr stunned Joshua by winning the IBF, WBA and WBO titles in June and the duo will go head-to-head again on 7 December in Saudi Arabia.

British boxer Joshua told Sky Sports: “I’m fighting the best man in the world now. I’m going to whup him, and show how great I am.

“They think he’s so great, so when I beat him I want everybody to bow to my feet and tell me how great I am.

“Apparently I’m fighting the quickest hands and the best fighter in the division. So once I beat him I want everybody to bow to me.

“When you talk about competition, people understand and respect that you have to carry a sense of fire in your belly. It’s not arrogance, it’s confidence.

“I’m confident that I know what I need to do now, and I’ve prepared to the best of my capability to go out and perform. Performance leads to the win.”

The 36 boxing referees and judges from the 2016 Rio Olympics will not be considered for duty at next year’s Olympic Games in Tokyo. The BBC reports that “several judges and referees were sent home from Rio after a number of questionable decisions during the boxing tournament”.

England star Ben Stokes hit 67 not out on the opening day of the first Test against New Zealand in Mount Maunganui. Tourists England finished day one on 241-4 with Rory Burns and Joe Denly also adding half-centuries. Day two of the second Test starts tonight at 10pm and is live on Sky Sports Cricket.

The Guardian reports that clubs in the top two divisions in the Netherlands will protest against racism by standing still for the first minute of this weekend’s fixtures. Last weekend Excelsior forward Ahmad Mendes Moreira was racially abused by Den Bosch supporters.

England striker Rashford, who signed a new long-term deal at Old Trafford earlier this year, told Sky Sports News: “There was no hesitation from me over signing a new contract. And it was the same for Ole as well - I could see where his head was at, where he wanted the club to be at and for me it was just a no-brainer.

“We were on the same page and wanted the same things for the club. Ole is a great guy and he has the club’s interests at heart so there’s not a better person for the job in my opinion.”

Six-time Formula 1 world champion Lewis Hamilton may be 34-years-old but the Mercedes driver says he does not fear the day he retires from the sport.

He told the BBC: “I know my life is not going to be over when I retire. And that gives me a lot of comfort. But right now I feel physically good enough to continue so I’m going to try to eke that out as long as I can.”

Belgium star Kevin De Bruyne says the complicated Euro 2020 draw format is a “scandal” and has accused Uefa of “falsifying the competition”.

The Belgians are furious that they have already been grouped with Denmark and Russia, and Finland or Wales, to make up the pool depending on the outcome of the play-offs.

Manchester City midfielder De Bruyne said: “It is a scandal, honestly. This feels like competition distortion. Football is not really football any more, it’s becoming a business.”

Euro 2020: anger grows at ‘scandal’ of the draw format

Former Scotland rugby union captain Tom Smith is ready to fight after being diagnosed with stage four colorectal cancer. The 48-year-old said: “I was in my hospital bed and I said to staff, ‘I’m determined to fight this’.” The cancer started in his colon and has spread to his liver and brain.

Sky in Germany reports that Mauricio Pochettino is being considered for the permanent manager’s job at Bayern Munich. Pochettino, who was sacked by Tottenham on Tuesday, is understood to be on Bayern’s shortlist to replace the recently-fired Niko Kovac. Hansi Flick is currently interim boss at the German giants.

Jose Mourinho has only been head coach of Tottenham Hotspur for one day but he’s already being linked with many players around Europe. Players on his reported target list include Gareth Bale, Ruben Dias, Paulo Dybala, Bruno Fernandes and Kalidou Koulibaly. 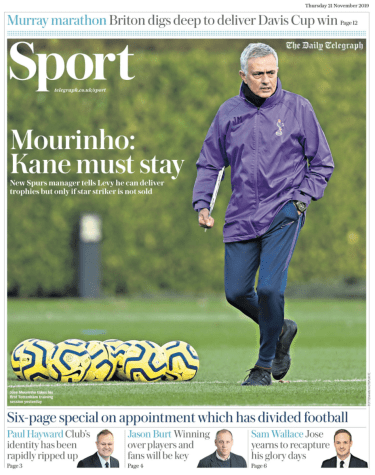 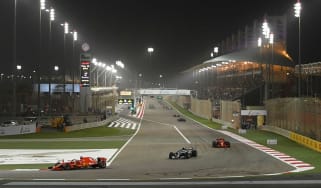