Ten things from the world of sport on Tuesday 7 January

If Paris Saint-Germain were to ever sell star striker Kylian Mbappe the French champions could demand a world-record transfer fee of €265m (£225.5m).

That’s according to the CIES Football Observatory which has published a list of the highest estimated transfer values for footballers playing in the big-five leagues in Europe.

Several papers report on what City boss Pep Guardiola had to say when asked if he could ever switch sides in the future.

“I will never train them,” Guardiola said of United. “Like I would not train [Real] Madrid. I will be in the Maldives if I don’t have other offers or on the golf courses.”

The semi-final first leg at Old Trafford kicks off at 8pm and is live on Sky Sports.

Max Verstappen has vowed that “the best is yet to come” after extending his contract with Red Bull Racing.

The 22-year-old has recently been linked with future moves to both Mercedes and Ferrari. However, the new deal ends that speculation and means he will remain at Red Bull until at least the end of the 2023 season.

Verstappen said: “I want to win with Red Bull and our goal is of course to fight for a world championship together.”

Arsenal head coach Mikel Arteta gave his players the hairdryer treatment at half-time last night after they had been given the runaround by Leeds United in the first half of their FA Cup third-round tie.

Reiss Nelson scored the winning goal in the 1-0 victory and after the match striker Alexandre Lacazette said: “The manager shouted a lot. He was not happy because we knew they’d play like this and we didn’t respect what he had said.”

Arsenal’s reward for their 1-0 win against Leeds is an FA Cup fourth-round trip to Bournemouth.

Holders Manchester City will face Championship outfit Fulham and Premier League leaders Liverpool will hit the road, playing the winner of next week’s replay between Bristol City and Shrewsbury Town.

Fourth-round ties will be played between Friday 24 January and Monday 27 January.

.@RoyalMail has revealed a set of 12 stamps that celebrate the UK’s contribution to video games. Here's the Sensible Soccer one. It's magnificent. pic.twitter.com/ugYOFzVlO3

The Royal Mail has launched a new set of stamps to celebrate classic video games. One of the stamps features the iconic Sensible Soccer game and is described by Mundial magazine as “magnificent”. Royal Mail’s video games presentation pack will be on sale from 21 January.

Premier League leaders Liverpool have announced a multi-year partnership with Nike from the 2020-21 season. The sportswear firm will supply the club’s official playing kits, training kit and leisurewear. New Balance has been the club’s official kit supplier since 2015 and will continue until the end of this season.

Cristiano Ronaldo has started the new year in superb form after scoring his first Serie A hat-trick for Juventus in their 4-0 win against Cagliari yesterday.

Portugal captain Ronaldo netted on 49, 67 and 82 minutes in Turin to keep the Italian champions level on 45 points at the top of Serie A with Inter Milan.

The treble against Cagliari was Ronaldo’s second hat-trick for Juve and 56th in his career. Lionel Messi, Ronaldo’s great rival, has scored 53 career hat-tricks.

Many newspapers today carry the comments of Edward Griffiths, the interim chief executive of Saracens, who admits that England’s dominant rugby club of the last decade might have to take some drastic action in the wake of their record fine for salary cap breaches.

The Times explains that the club may have to “trim their wage bill by offloading players or implementing wage cuts”.

In November Saracens were given a 35-point deduction and fined £5.36m for breaching league salary cap regulations. 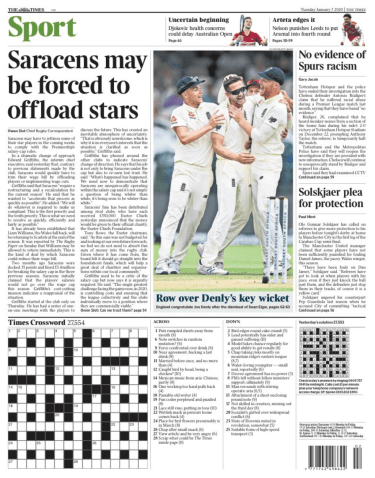