Sport shorts: ten things from the world of sport on Friday 3 April

English Premier League clubs will consult with players over taking a possible 30% pay cut amid the coronavirus pandemic.

Following a meeting of all 20 clubs the Premier League also confirmed:

A statement said: “It was acknowledged that the Premier League will not resume at the beginning of May - and that the 2019/20 season will only return when it is safe and appropriate to do so.

“In the face of substantial and continuing losses for the 2019/20 season since the suspension of matches began, and to protect employment throughout the professional game, Premier League clubs unanimously agreed to consult their players regarding a combination of conditional reductions and deferrals amounting to 30% of total annual remuneration.”

In regards to the payments to the lower leagues and NHS, the EPL added: “Discussions also took place regarding financial relief for clubs in the short term and while there is no single solution, measures are to be put in place to immediately deal with the impact of falling cash flow.

“Critically, the League unanimously voted to advance funds of £125m to the EFL and National League as it is aware of the severe difficulties clubs throughout the football pyramid are suffering at this time.

“In consultation with the Department for Digital, Culture, Media and Sport, the Premier League is immediately committing £20m to support the NHS, communities, families and vulnerable groups during the Covid-19 pandemic.

“This includes a direct financial contribution to the NHS and funds to enable clubs to refocus their efforts and develop significant outreach programmes to help communities, including those most in need. This funding will enable both immediate and longer-term support during the crisis.”

Sky Sports pundit Neville has assisted the NHS by allowing the use of two hotels he co-owns in Manchester and in response to Hancock’s comments he said on Twitter: “I wish I was a player for 10 more mins. The PL players are more than likely working on a proposal to help clubs, communities and The NHS.

“It takes longer than 2 weeks to put together. Matt Hancock calling them out when he can’t get tests in place for NHS staff is a f@@@@@g cheek!”

It’s been revealed that Paris Saint-Germain and Brazil forward Neymar has made an anonymous £775,000 donation to help fight the Covid-19 coronavirus. The donation will be split between Unicef and a solidarity fund in his home country.

Brazilian TV presenter Chris Flores said: “He preferred not to publicly disclose [the donation], so we’re telling everyone, because as soon as we pull the ear, we also talk when the person does something nice.

“We have this information, I brought it to you. We really think it’s a very cool, very positive attitude, and one that serves as an incentive for other sportsmen, for other personalities.”

4. Edgbaston to be drive-through testing station

Warwickshire County Cricket Club have announced that Edgbaston Stadium will be donated to the Department of Health and Social Care to create a drive-through Covid-19 testing station.

The cricket ground’s main on-site car park will be used to regularly test NHS staff who are working in Birmingham and the wider West Midlands region.

Neil Snowball, chief executive of Warwickshire CCC, said: “Whilst it is a small part to play in the grand scheme of things, we are pleased that our stadium can be utilised to support the fantastic efforts being made by all of our NHS staff in response to the coronavirus crisis.”

5. Could Joshua vs. Fury happen this year?

Eddie Hearn says Anthony Joshua is “extremely interested” in a mega-fight against Tyson Fury - if a deal can be reached with Deontay Wilder to step aside.

Fury defeated Wilder in the Las Vegas rematch in February and there’s a clause in the fight contract for a third duel between the duo.

However, due to the coronavirus pandemic Fury vs. Wilder III is now expected to take place in October and Joshua vs. Kubrat Pulev on 20 June is also likely to be delayed.

Speaking to Sky Sports, Joshua’s promoter Eddie Hearn said: “The one positive that could come out of this for boxing is you might find people jumping into bigger fights sooner, rather than later, because of course, their activity has been slowed.

“We’ve got 20 June as a pencilled date for Anthony Joshua. That’s likely to be delayed. I think that’s pretty straightforward and obvious. Hopefully until the end of July. But if it starts kicking on beyond that, then you get to a situation where if Joshua is only going to box once this year, he would very much like that to be against Tyson Fury.

“The situation is a little bit out of our hands in that, if Bob Arum and Al Haymon can talk and make Deontay Wilder wait a little bit, we would absolutely love to go into that fight next.”

Stokes will race alongside Alex Albon for Red Bull and they will take on rivals including Ferrari’s Charles Leclerc, McLaren’s Lando Norris and Williams’s George Russell.

Played on the official 2019 F1 video game, the race will start at 8pm on Sunday and is live on Sky Sports F1 and Sky Sports’s YouTube channel.

McLaren Formula 1 driver and avid gamer Lando Norris has a new hair do after making good on a promise to shave his head for charity.

The Rugby Football Union has confirmed that Newcastle Falcons will be promoted back to the Premiership next season.

BBC Sport reports that the Championship table has been decided by a “best playing record formula” and Newcastle have won all 15 league games in the 2019-20 season.

Newcastle will replace Saracens, who have been relegated from English rugby union’s top division because of salary cap breaches.

The French World Cup winner has a desire to work with Real head coach Zinedine Zidane and 90min says his “priority” is to secure a switch to Spain.

Real have regularly been linked with the 27-year-old, as have his former club Juventus. Paris Saint-Germain and ​Bayern Munich are also “monitoring his situation” but Real remains his first choice.

One story dominates the back pages and that is the ongoing furore about footballers’ wages, or more particularly those of the Premier League’s finest.

Gary Lineker has sprung to the defence of the players, reports Metro, with its “give players a chance” headline.

The former England striker turned pundit is quoted as saying: “My inkling is footballers will take pay cuts, they will help out in communities, they will make donations in whatever way they can, and I think we need to be a little bit patient with them.” 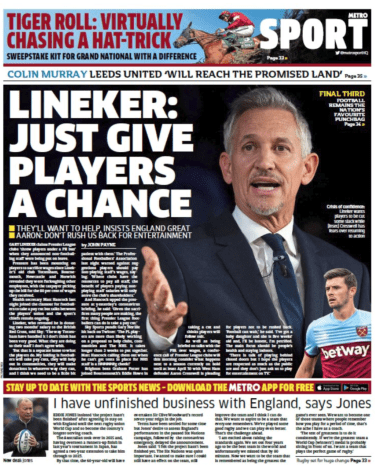 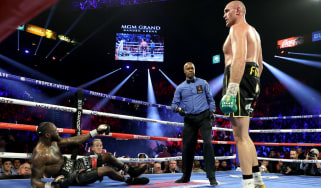